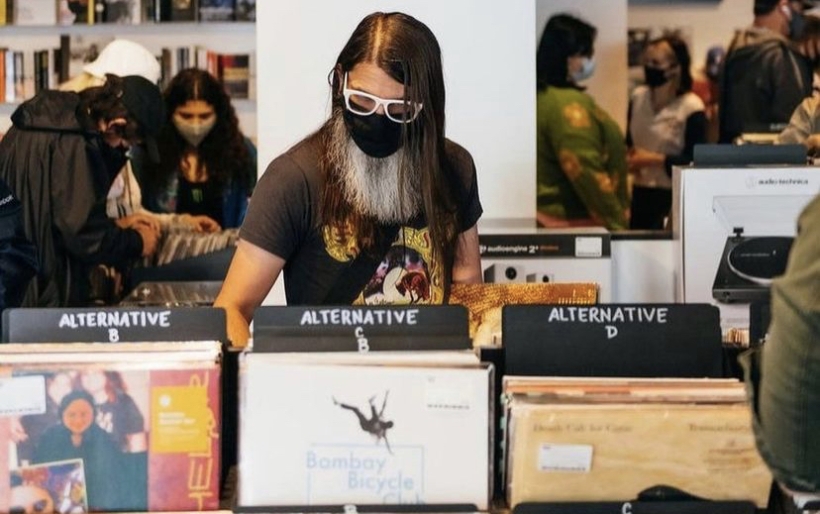 “From the time I was a kid, music was it,” says John Stanley. “Whatever has been thrown my way in life, music will always take me out of it.”

The host of John’s Dollar Bin on WXPN is reflecting on a lot of different ways he’s intertwined with music; making mixtapes for friends, working at Tape World in 30th Street Station, co-owning South Street’s beloved Spaceboy Records from 1997 to 2007. And of course, hosting this popular weekly segment on XPN, which celebrates its sixth anniversary today.

Stanley tells me he has always gravitated towards people who are huge music-heads (his husband, XPN DJ Robert Drake being among them). The conversation is always fun, and always presents him with opportunities to learn – he loves connecting with folks who can turn him on to new things to listen to.

“Sometimes I encounter listeners who think they shouldn’t try to tell me about new music,” Stanley says. “Please don’t do that. Always tell me. Maybe I do know the song, but I don’t know the artist…or I know the artist, but don’t know the record. It could be an artist I know, but we can still talk about it. That’s the beauty of music, the conversation: you start to see the passion. That’s what I love about music, it makes people really passionate.”

It’s how he and Dan Reed became buds: “Dan and I are like-minded and grew up around the same time, he’s a little older but we ran in the same circles musically, so we have these great conversations.” And as Stanley tells it, one of those conversations led to a casual idea – one of many off-the-cuff sparks of inspiration he says Reed has all the time.

“He just fired this idea at me from across the room, it was just happenstance,” Stanley recalls. “We were talking about when we were kids, Woolworths was place to go, and I spent my allowance very week, getting two records for $1. I remember getting all four of the Kiss solo records the day they came out for $2. So we had this conversation about buying stuff for a dollar, and Dan’s like ‘we should do this weekly!’ Pete Donnelly recorded the theme and the rest is history.”

The mythology of the segment came together quickly: every week, Reed gives Stanley a dollar, and Stanley returns with a find from a local discount bin, and talks about it on-air. He loves that concept – being able to find a gem for a buck.

“And sometimes it’s not even about the whole album being a gem,” Stanley says. “It could just be one really good song. You know what you’re getting into, it’s $1, but it’s worth it because this one song could be killer.”

In addition to the conversation, John’s Dollar Bin works as a way to keep the focus on independent record stores on a year-round basis – not just on the semi-annual Record Store Day sprees, when these days a lot of stores wind up with a big ring but also a big headache, and excess copies of reissues no one asked for.

Stanley laughs when I say this, and offers a diplomatic – though still critical – take. “Initially the thing I liked about Record Store Day was bringing independent record stores into the center of the conversation, as well as the labor that goes into running them,” he says. “That’s important. But it’s gotten a little out of control, not catering to those people anymore.”

Stanley prefers an Every-Day-Is-Record-Store-Day outlook, which is why we asked him – for the anniversary of John’s Dollar Bin to let us know his favorite discount bins in the city. And he’s choosing that phrase specifically: dollar bins, he acknowledges, are going by the wayside, and now you’re more likely to see $2 bins, or $5-and-under bins. But it still has the same impact, and leads to those chats he relishes.

“Every once in a while you get to have the ‘dude I, found this for a dollar’ conversation with a fellow crate-digger,” he says. “It’s that crazy excitement…and mayyybe you want to see that hint of jealousy in the other person.”

Mostly, though, he says it’s in good fun, and he finds it humbling how many folks respond to John’s Dollar Bin.

“So many people have come out of woodwork saying they love the segment, they love to go $1 shopping,” Stanley says. “There’s a camaraderie.”

For the official John’s Dollar Bin guide to Philly discount bins, read on.

“It’s kind of where it all started. A great selection for dollar-bin records and CDs, and the new selection is killer.”

“You can go deep digging under the racks and find many gems for cheap, plus anything you want for new is always found.”

“So many cheap record and CD finds, and the new selection is also out of this world.”

“It’s a hike, but truly worth it. The selection is fantastic.”

“Killer used selection, and they are always getting in new collections.”

“All have great selections and are constantly changing.”