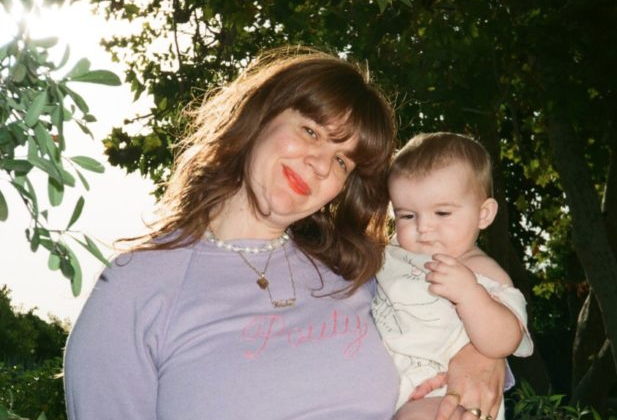 For Philly native Rachel Gagliardi, punk rock and parenthood are not mutually exclusive. The latest single from her project Pouty — which, in the studio, also features hometown friends Cat Park of Amanda X on bass and Jarret Nathan of Pears on drums — is a meditation on first-time motherhood, the highs and lows and everything in between, and it’s set to music as gritty and driving as anything she’s released in the past.

Over email, she tells us that “Bambina” is a fight against the damaging societal notions that everything stops, including your ability to create music and art, once you create a new human being. In addition to being a mantra, the song was also a challenge to herself: it’s the first piece of music she’s recorded since her daughter Madonna was born, and the first she’s worked on since COVID. She wanted to release a new track and video before January of 2022, within her first year of motherhood, so she made a point to keep moving creatively.

“Pregnancy in a pandemic meant a very intense experience,” Gagliardi says. “None of my family got to see me pregnant, and it wasn’t until this summer that I finally felt it safe to fly home to Philly for a visit. I wrote and recorded ‘Bambina’ on that trip.”

After landing back home in Cali, Gagliardi says she’s “absolutely busted my ass self-funding and self-promoting this release” — including the beautiful new music video you can watch below — “because I believe in the importance of self expression and the therapeutic release of creating music.”

The video, shot on 8mm by LA filmmaker Nikki Milan, follows Rachel and Madonna through some of their favorite spots in their sun-kissed neighborhood of Ojai, CA — stretches of the Pacific Ocean shoreline, a lush farm, and a neighbor’s home — giving an intimate look at their family lives while also sharing very open and vulnerable thoughts about what starting a family means to one’s life.

For Gagliardi, it’s holistic: “This release exemplifies what it’s like to be a truly independent artist, entrepreneur, and mama. As someone who worships DIY culture, Pouty has no financial support, label, manager, or team behind the scenes. As a feminist artist and working mother, I struggle with balance and my identity, constantly wondering, am I working too hard or am I not working hard enough…Ultimately, my motivation is my legacy, leaving behind works of art that my daughter can someday look back on and realize how inspiring she was to me. How she helped me believe in myself for the first time in a very, very long time.”

Watch “Bambina” below and buy the track at Bandcamp.