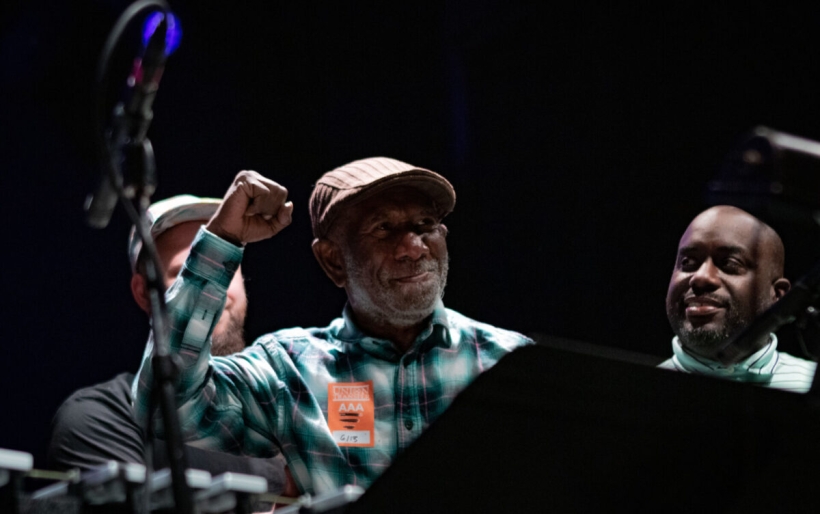 A sublime performer and visionary composer, a master of his instrument in a way that shaped music for generations, Philadelphia vibraphone player Khan Jamal has sadly passed away this week at age 75.

According to a report by NPR Music critic Nate Chinen over at WBGO, Jamal’s family confirmed that he died of kidney failure Monday at Chestnut Hill Hospital. Sentiments of admiration and love poured out on social media throughout Tuesday; Jamal’s friends at Brewerytown Beats (who helped reissue several of his recordings in recent years) shared a plethora of archival images on their Instagram page, while Jamal’s peer Jamaaladeen Tacuma, a Philly bassist and visionary in his own right, offered a warm remembrance on Facebook.

“He, along with other Philly musicians Monette Sudler and the late Byard Lancaster, help[ed] pave the way for Improvised music scene here in Philadelphia,” Tacuma wrote.

Sudler, a renowned guitarist, along with saxophonist Lancaster were bandmates of Jamal in Sounds of Liberation, a Germantown-rooted band that moved in parallel with the Black Arts Movement of the 60s and 70s. The band harnessed music as a means of social activism, advocating for students, prison inmates, and their community at large through meditative and otherworldly compositions that took the lead of the free jazz movement and guided it into resplendent, atmospheric realms.

“Khan had a very warm sound,” says Sudler told Chinen in the WGBO piece. “He liked to play avant-garde, but then he was also very melodic. I would say he was versatile in his approach to music, which is something we both developed working in the same group.”

The band released one album, New Horizons, in 1972 via their label Dogtown Records; it was reissued in 2010 via Porter Records. Subsequently, Peter “Max” Ochester of Brewerytown Beats helped the band release a vinyl edition of a 1973 radio session at Columbia University that was thought to be lost; Untitled came out on vinyl in 2019.

Born in Jacksonville, Florida and raised in Philadelphia, Jamal began playing the vibes as a teenager, studying at Philly’s renowned Granoff School of Music. After co-founding Sounds of Liberation at age 24 — the band operated as a collective, with each of its six players holding an equally integral role — Jamal released his first solo album, Drum Dance to the Motherland, in 1973.

In 1984, he recorded the absolutely dazzling Infinity LP, which got a vinyl reissue last year on Jazz Room records. The album was recorded in Ambler, and featured a robust cast of players: SOL players Lancaster on winds and Omar Hill on percussion, with Clifton Burton on harmonica, Bernard Sammul on piano, Reggie Curry on bass, and drummers Dwight James and Sunny Murray.

In a review of the reissue, The Key’s Thomas Hagen wrote “Compared to [Sounds of Liberation], the band on Infinity sounds smoother and more focused, but holds several of the same priorities, including improvisational fluidity and a cool commitment to the groove. Throughout the five tracks here, Jamal’s mallet percussionism reigns supreme and his confident syncopation cuts through the mix effortlessly…while the rhythm players fill this space with their own accessible calm, mirth, and unpretentious mutuality.” Jazz Room founder Paul Murphy said of the album, “I can’t even begin to tell you how proud at Jazz Room we are to be associated with such a masterpiece.”

You can hear echoes of Jamal’s influence in a spectrum of artists over the decades, from Tortoise to Kamasi Washington, and Irreversible Entanglements; Chinen notes that, although Sounds of Liberation and Jamal did not make much more than a regional impact in the 70s, esteem and appreciation for him has grown exponentially over the years, particularly since his work began resurfacing in reissues: “Jamal maintained a high level of respect in this century, performing often at the Vision Festival and appearing on noteworthy albums by saxophonist Jemeel Moondoc, trumpeter Roy Campbell and pianist Matthew Shipp,” he writes.

One of Jamal’s final public appearances was on June 13th, 2019, when Sounds of Liberation’s surviving players reunited at Union Transfer for Ars Nova Workshop’s celebration of the 95th birthday of Sun Ra Arkestra leader Marshall Allen. Though Jamal was unable to personally perform — New York vibes player Juan Diego took his place, while West Philly saxophonist Elliot Levin sat in for the late Lancaster — he watched the set from side stage, smiling, and Ochester recalls walking him onstage and introducing him before the set began, to a round of thunderous applause from the crowd.