HUEY, the Cosmonaut talks about creating the greatest imaginary R&B station in the midwest on new album 'Rustbelt Radio' - WXPN 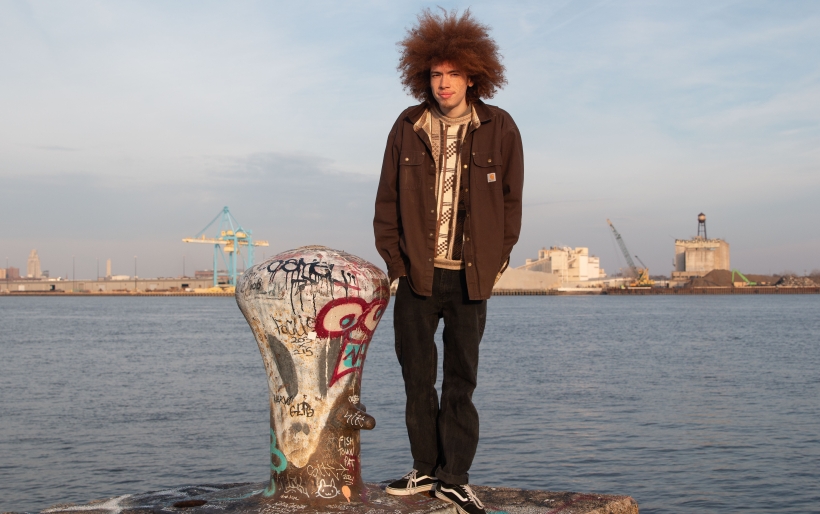 HUEY, the Cosmonaut | photo courtesy of the artist

HUEY, the Cosmonaut talks about creating the greatest imaginary R&B station in the midwest on new album ‘Rustbelt Radio’

Representing the midwest in Philadelphia is eclectic artist HUEY, the Cosmonaut, whose music spans hip-hop, R&B, electronic rock and beyond. The Illinois transplant has a foot in both camps, but dedicated his most recent release, December’s Rustbelt Radio, to his small hometown of Rockford, IL. “This album is about being in constant transition with no long-term direction,” says HUEY, who prefers to be referred to by his artist name. “Rustbelt Radio is my love letter to the city. Rockford is boring and I’m boring as hell, too.” However, “boring” isn’t how we would describe Huey’s latest at The Key: quite the opposite, in fact, as this record stood out among a number of late-2021 local releases. With Rustbelt Radio, Huey spins his feelings of boredom and isolation in Rockdale into a groovy, multidecadal-influenced rhapsody.

It’s no stretch that a concept record put out in the last couple years, that has little to do with COVID and its societal effects, is a rarity. While Rustbelt Radio isn’t ignorant of the times, with its themes of loneliness and escapism, it does however help one forget the toll of living in the big city during a pandemic. Trade crowded streets for the open road of rural Illinois, and turn the dial to Rustbelt Radio, the near-real station imagined by HUEY, the Cosmonaut, where the genres run the gambit but there’s only one artist. Read on for a conversation with HUEY about how he came up with the concept for Rustbelt and its many influences, including a thoughtful accompanying reading list.

The Key: The new record, Rustbelt Radio, is a concept record about a fictional radio station you wish existed in your hometown. How did you come up with that idea?

HUEY, the Cosmonaut: I spent a lot of time over the last year driving. I was involved with somebody who was living in Chicago, so I would drive a lot to Chicago. I’m from a small city in Illinois. And also I worked at a UPS shipping facility, and I would work there super late at night. So I’d be driving a lot and I would also roadtrip all the time. I always wondered like — there’s not like super good radio in that area, it’s just the same hip hop station or the station that plays the top hits — and I was thinking about this idea: what if there was a radio station that played music that I liked, like R&B and hip-hop. That was my idea of a fictional radio station.

TK: I picture radio programming in the midwest as more outrageous and politically-consersative than it is here. Listening to Rustbelt Radio–the complete opposite of that–feels like satirical commentary. Did you write the album with that in mind?

HC: There are a lot of kooky people on the radio. It’s also interesting you bring this up because it’s the least political record I’ve ever written. It’s really personal. But at the end of the record, there’s a reference to an anti-police rebellion in Rockford, and I’m like “fuck them [the police].” But the rest of the record is not political, actually. Radio’s kind of interesting because it doesn’t exist like it used to 30, 40 years ago. I mean, people listen to radio now, but also podcasts and Spotify. Playlist compilers are kind of the new radio DJs.

TK: This is slightly unrelated, but have you heard The Weeknd’s new album, Dawn FM? His concept for a fictional radio station sounds close to yours.

HC: Someone messaged me and was like, “this person stole your record concept.” Which I thought was funny. But I think radio is a pretty common thing. I would love to get my stuff on the radio in Rockford – I think that’d be funny. But I think radio is something that a lot of artists think about. Driving and listening to music is a big part of what I was doing for the last year. Also Rustbelt is just a love letter to my hometown. Some of the DJs [on the album] are references to my hometown.

TK: Tell me more about your hometown of Rockford, IL and how it inspired the album.

HC: It’s a post-industrial–this is why I was calling it “rustbelt” — city, a lot of abandoned factories, which give it a distinctive character. And also there’s a real desolation, because there’s not a lot of opportunities. There’s not a lot of young people. It’s not a fun place to be a young person; a lot of young people just drive around in their cars for fun. There’s not really a scene, like Philly has a music scene. And what used to be is now gone because of COVID. Part of the reason I was writing the record is I wanted to speak to the experience of feeling alienated and isolated. I was spending a lot of time by myself, driving and working at night. And when you’re working at night, you’re sleeping during the day, so you’re not having a lot of interaction with people. I was trying to capture that loneliness of living in a place where there’s not a lot of social opportunities for young people, and the pandemic just exacerbated that.

TK: In Philly though, you belong to a vibrant group of creatives, a music collective called Bad Apple Commune. Can you tell me more about their influence?

HC: It was a group that formed in 2019. It was formed as a group of mostly Black artists and musicians. A lot of people who were doing creative shit in Philly, and were trying to do stuff with other Black folks because the scene can be kind of insular. I had met Kennedy [Freeman] of Highnoon through Bad Apple – they’re a mad cool person. Kennedy introduced me to a lot of people in the city. That was a really good group of people that I was around, and then I moved back to the midwest. When I lived here I had a whole lot of collaborators, and when I got back to Rockford I was just making music by myself.

TK: Rustbelt flows into a number of different genres and moods. What were some of your influences for the styles you chose?

HC: I listen to everything. This record was really inspired by Motown, which is a midwestern thing, coming out of Detroit. “Healing Potion” was my attempt at a Motown song mixed with midwestern emo. Actually, Philly has a big midwestern emo scene. I went to a lot of shows in my youth that were midwest emo shows. I didn’t particularly like it — that twinkly guitar — but I got used to it. “Healing Potion” was a melding of Motown and midwest emo, which are both midwestern genres. I’m always curious to hear what people think my music sounds like, because I’m not really sure. I feel like I don’t fit into a particular box, which is cool at times but also it’s hard. I’m trying to make R&B, but I also like folk music, and blues. I’ve been working on new stuff, and the things that people like and that I like about this record, I’m trying to lean more into. I think this record was in a lot of cases just an experiment of a bunch of different things.

TK: You’re an avid reader. Do you often find ideas for writing songs from books?

HC: Yeah, I wrote a Doo-wop track that is actually written about this book I read, this trilogy. I actually have on Bandcamp a reading list of all the books I read while I was making this record. I was reading a lot of graphic novels while I was finishing the project [see below]. I was working as a librarian, so I had a lot of time to read. I read all the time anyway, but I had more time to read because I was at my job. I had this desire to escape Rockford; even though I love it, I didn’t want to be there. So a lot of science fiction and fantasy helped me out of the loneliness I was feeling the past year. I went to school for political theory, so the last four years I’d only read dense political theory texts, so 2021 was the year I started reading creative stuff again. There’s this trilogy called Red Mars which inspired the track about Mars. The idea of trying to escape things inspired the song “Mages Tower,” which I just put out a video on. I have a wizard’s hat on–it’s funny. I think wizards making magic is like [musicians] making music. Music to me is a lot of escapism and emotional processing.

Reading list:
Red Mars by Kim Stanley Robinson
The New World by Chris Adrian and Eli Horowitz
Monstress by Marjorie Liu, Sana Takeda, and Yukari Shiina
Wynd series by James Tynion IV
Misfit City by Kurt Lustgarten and Kristen Smith
Failed State, Rule of Capture, and Tropic of Kansas by Christopher Brown
A Dead Djinn in Cairo and The Black God’s Drums by P. Djeli Clark
Bttm FDRS by Ezra Claytan Daniels
Your Black Friend and Other Strangers by Ben Passmore
Sports is Hell by Ben Passmore
Parable of the Sower and Parable of Talents by Octavia E. Butler
The Way of Kings by Brandon Sanderson
All About Love: New Visions by Bell Hooks
Seeing Like a State by James C. Scott
Black in the Middle: An Anthology of the Black Midwest by various authors
Related Content
View All Related Content