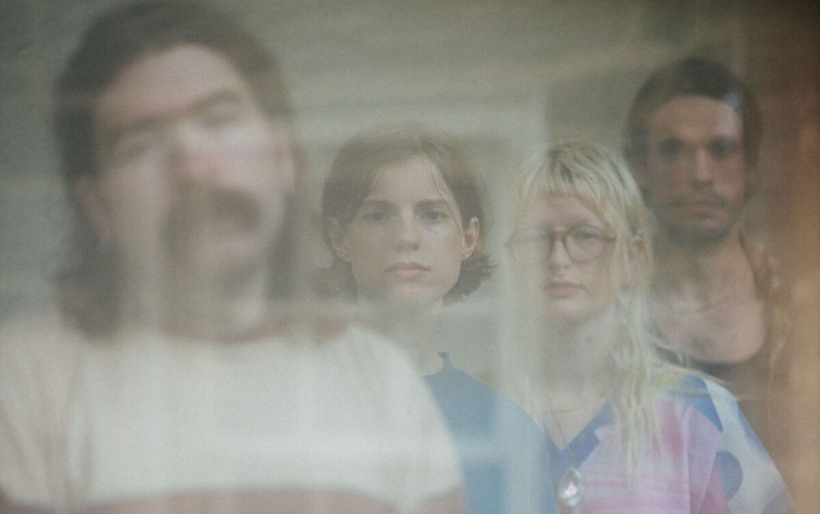 Empath | photo courtesy of the artist

Putting out an album during the pandemic can be a bit of a fool’s errand: Will it be safe to tour? How many times will the record release show be delayed? Will the physical albums even get there on time? Is any of it even worth it? Psych pop quartet Empath grappled with all this and many more actual and existential crises during the making of their sophomore album Visitor. It comes out today on Fat Possum Records.

The band first started working on Visitor with producer Jake Portrait in Brooklyn back in late 2020, though some of the songs have existed for even longer than that. The overall feeling of the album is one of hope, or at least not too much despair. In a two-year period dominated by the latter, by canceled shows and tours – like the one with Fucked Up that the band was supposed to have been on all last month – sometimes all you can do is focus on the positives and try and move forward.

The band is made up of Catherine Elicson on guitar and vocals, Randall Coon and Jem Shanahan on synthesizers, and Garrett Koloski on drums. We caught up with Elicson, Coon, and Koloski over Zoom back in late January, the day after a massive storm dropped half a foot of snow on Philly

The Key: Did you get to go sledding yesterday? What was your snow day like?

Randall Coon: We had a little shut-in recording project.

TK: I saw that on Instagram. What were you working on?

Catherine Elicson: It was [a session] for Rough Trade Transmissions. Songs from the record that we recorded live versions of. We played at the Rough Trade store in New York.

Garrett Koloski: They had that weird thing that you could climb into. Like, at the record store. Could you climb into a stomach or something fucking weird and it had a bunch of disco balls and plushy bullshit [in it]?

GK: Either that or I made it up.

TK: Even better. So the album is coming out in a couple weeks…

CE: Woo! I just got anxiety.

TK: The tour with Fucked Up was canceled but you will be on tour in April, fingers crossed. Listening to this album, the thing that really struck me was how positive it sounds. I don’t think I’ve necessarily sought out ‘negative’ music over the past couple years but like everyone I’ve definitely been brooding. But the music on this is very fun to listen to. Also the video you did for the song “Born 100 Times” at the fair made me so happy.

CE: That was fun. It was the New York State Fair. It was huge. I’ve never been to a fair that big.

RC: It was too big. Too much happening.

TK: Did you grow up going to fairs?

CE: I went to the Ohio State Fair but you guys went to that fair growing up, right?

GK: Yeah, Jem and I both grew up in Syracuse and went to that fair as kids. The only difference is that all those old-timey light bulbs are no more, everything is LED. But it was still a good time.

TK: Do you have a favorite ride?

CE: I’m afraid to go on rides at fairs. [laughs]

GK: Remember when we went on the Scrambler and we didn’t read the thing that said, “The heavy person should be on the inside” and so the whole time I was just fucking squished?

CE: I thought my hips were going to break. That was fun.

GK: For some weird reason I feel like the Ferris wheel is the only ride at the fair that freaks me out. You’re so high up there and they always do that thing where they leave you at the top for a minute.

CE: It’s like the longest ride. You’re stuck on it for a while and you just get to sit and think.

GK: Yeah, it’s not fast enough for you to, like, enjoy the ride. You’re just like, ‘Huh, this is really something. I can see the whole fair but also this whole car could fall right now.’

TK: I feel like instead of referring to the last couple of years as a roller coaster we should start calling it a Ferris wheel. Like a Ferris wheel at a shitty county fair where everyone might die. But anyway! Let’s get back on topic. You’re going on tour in April. Eight shows. I saw when you played with Mesh back in August outside of Space 1026.

RC: That show was fucking awesome. I love Mesh.

TK: Did you get to play that many other shows last year?

CE: We did the Modest Mouse tour. That was a month. And we did one headlining show in New York in November and a college show.

GK: So do we. A crowd-pleaser, for sure. I love college shows! Sometimes there’s just fun energy on college campuses.

GK: Didn’t we all get cheeseburgers?

CE: Yeah, they ordered us food from their campus cafeteria.

GK: It was funny because you couldn’t drink in the venue but it was like kind of like a garage situation where they had a huge garage door that they would open and close. So then all the college kids would just, like, hang out outside the venue ripping cigs and weed and [drinking] booze. It was really funny.

RC: Also it was Halloween.

TK: I saw that on the new record you have a song named after Elvis. On that subject, what band or musician would you cover for a Halloween cover show?

GK: Crass. Doing Penis Envy would be sick. Just going to throw that out there. Catherine, didn’t we joke that we should do Led Zeppelin?

CE: [Laughs] Yeah, that’s what I was thinking. ‘What would be the most difficult thing to learn?’

TK: I know you started working on this album a while ago and while normally a year wouldn’t feel like a long time … it’s been a very, very long couple years.

CE: It doesn’t feel like it’s been that long. But at the same time I also feel like, I don’t know, I could go both ways. The songs have been around for my entire life at this point.

RC: We’ve been working with the material so long I thought the record was already out.

GK: [Laughs] It’s interesting because we haven’t really gotten the chance to play them live all that much they don’t feel old or stale, you know what I mean? I feel like all the times we play live we’re constantly changing little things up. I’ll hear certain things that Jem or Randy or Catherine are doing and I’ll be, like, “Oh, I’ll try to like change this up or try to accent this.”

That doesn’t make them feel old even though – Was “Born” the first song we wrote together for this album?

GK: I guess time has flown by but it doesn’t feel like it.

TK: Time has become weird as shit. Hopefully we’re over the hump and back on the road to some semblance of normalcy.

CE: That Modest Mouse tour feels like forever ago now despite the fact that it was only a couple months back.

GK: What was that, October?

TK: What’s behind the album art? To me it seems really positive because it’s a bunch of open doors, even if one of them doesn’t really go anywhere. If you go in that door you might get stuck for a little bit but that’s okay cause the lighting is great.

CE: That’s an interesting interpretation of the album cover. I never thought of it as a hopeful ‘doors are open’ type of thing. To me it felt more eerie or creepy, like something is lurking. Part of the reason we chose that photographer – Andrew Aemond – was it kind of suited some of the feelings of the record.

If I was going to analyze the lyrics or whatever, [they’re about] the space left between people or the feelings people leave between each other. All of his photographs are of abandoned buildings and houses, spaces that people have left but have been lived in. And so I felt like it kind of fit.

GK: Also it seems like a space that people once inhabited but no longer do. But I also feel like circling back [to] you saying how it sounds, like, joyful or hopeful or ecstatic. When Catherine and I first became friends and were talking about music, we always talked about the Ponytails vibe [and how] their whole thing is ecstatic joy, you know? And we were, like, “How do we do that with just the sounds?” I feel like it’s just making stuff kind of be busy, you know what I mean? Really full-sounding and busy.

CE: I don’t know why, but I’ve always felt more interested in music that had more of a major key type of feel to it.

RC: Without sounding folky at all, too, because I feel like a lot of major pentatonic always sounds childish or folky.

TK: I’ve always enjoyed stuff where the music is real fun and catchy even – or maybe especially – if the lyrics are not necessarily on that same page.

CE: Yeah, I feel like I’ve always enjoyed that kind of, like, complicated emotional feeling from a song where the music is fun and catchy but then it’s sometimes complicated by the lyrical content. It’s not just, “I’m feeling these intense feelings and I’m gonna play this minor chord and that’s gonna illustrate how I feel or something.” Because feelings aren’t that black and white. So I feel like it adds a complexity to it.

TK: I think that juxtaposition makes for good music a lot of the time.

CE: I mean, I also like music that is just really sad. But I feel like anything that has some catchy element makes it feel like, I don’t know, hopeful or meaningful or whatever. One of my favorite records is I See a Darkness by Bonnie Prince Billy, which is just the most maudlin record that’s ever been made but there’s some really catchy vocal melodies on it that make it feel … I don’t know how to describe it.

RC: Well it makes it relatable if you have a pretty intense subject matter and then also a hook like that. It’s no longer complaining if it’s tuneful. [Laughs]

TK: Well, I think we’ve covered basically everything at this point. Halloween, college shows, and how to turn bummer topics into good music. So last question time: outside of the anxiety you mentioned earlier, how else are you feeling about this record finally coming out?

CE: I’m excited, too. I’m looking forward to having it just be out there. I think excitement and anxiety are very related. The anticipation has been so drawn out.

GK: Yeah, for sure. Yesterday we got to hold the records and see them and I was, like, “Wow, this is really happening.” Be here now. I’m excited! I feel like it’s been a long time and it’s nice to put something out into the world you know?

CE: Now all the creative aspects of it are finished. We finally finished the last video for it. All the work is done. We’ve done all we can do.

The record release show for Empath’s Visitor is March 22nd at The Dolphin with Enchanted Forest and Primal Rat Screw. More information can be found at the XPN Concert Calendar.