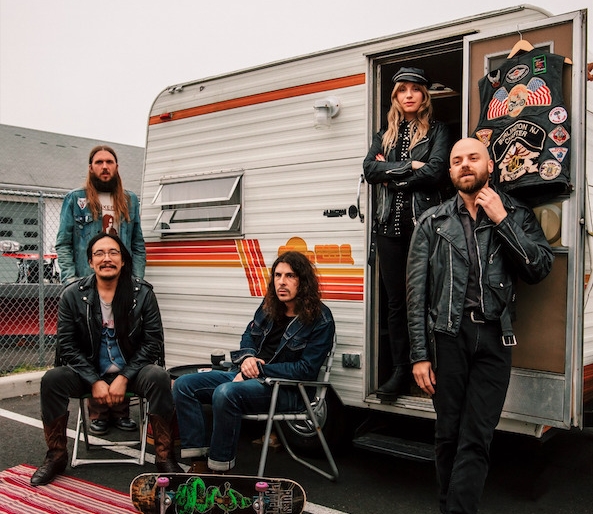 The first new music by Ruby the Hatchet in five years is out now. “1000 Years,” a song from the forthcoming Live at Earthquaker EP, is available as a full band video shot at EarthQuaker Devices headquarters in Akron, Ohio. The full tracklist from the EP includes another live favorite, “Primitive Man,” and “Easy Livin’,” a Uriah Heep cover. Available on physical media only, Live at Earthquaker will be released by Magnetic Eye Records on April 22.

Released in 2017, Ruby’s last album Planetary Space Child made a splash in the heavy music scene, allowing the band to pick up heavy-hitter touring partners (Black Mountain, Earthless, Arthur Brown, among others) and catch the attention of Magnetic Eye Records — even earning a place on the Billboard Top Indie Albums Chart. Live at Earthquaker will give fans a taste of how the band has developed in the time since.

The psychedelic doom-rock band’s collaboration with Earthquaker and Magnetic Eye began in 2019, when Ruby was on tour with Kadavar. “We had been road-dogging for a few years straight and felt very much in the pocket,” singer Jillian Taylor said in a press release. “We love that these songs were captured live with footage from EQ and exist in their own realm, apart from their studio versions which came a year later.” Their studio versions, as Taylor refers to, will be released on Ruby the Hatchet’s new studio record announced for later in 2022.

Watch below for the session video for “1000 Years,” and stay tuned for more from New Jersey’s psychedelic heavy rockers in 2022. To pre-save a physical copy of the EP Live at Earthquaker, click here.