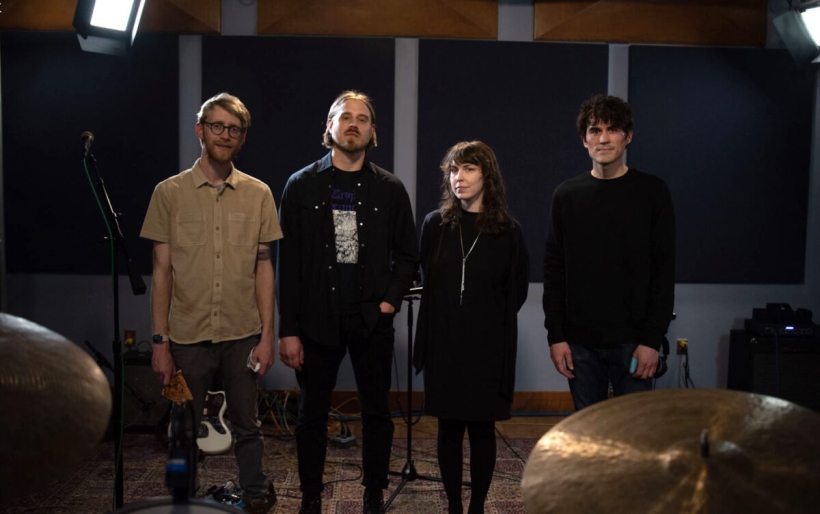 Zinskē’s debut full-length album Murder Mart unpacks heavy topics such as wealth inequality and social injustice, but its brisk beats and fuzzy riffs are a source of light and life in the chaos.

If we’re truly living in the end times, Philly rock four-piece Zinskē provides a soundtrack that’s both distressed and danceable. Their debut full-length album Murder Mart, released earlier this winter, unpacks a slate of heavy topics — wealth inequality and the weight of capitalism, social injustice and suburban malaise — but its brisk beats and fuzzy riffs are a source of light and life in the chaos, dulling the pain of a world that always seems on the verge of collapse.

The project of singer-guitarist Chris Lipczynski, lead guitarist Kevin O’Halloran, bassist Emily Cahill, and drummer Derek Salazar, Zinskē began making music in 2018, has spent the past couple years recording and refining Murder Mart, with production collaboration from scene friends Craig Hendrix of Japanese Breakfast, Jeff Ziegler on mixing, and Ryan Schwabe on mastering. On the one hand it’s the work of many Philly music all-stars, but it’s also a compelling set of music above and beyond that.

Take the darkly humorous “Ghost Dad,” a ragged Pixies-esque rocker that processes the unease around parenthood and questions the birth-school-work-death American dream through surreal vignettes of a father who dies, and grows as a parent and person by continuing to hang around the neighborhood in spirit form. Their performance of it at WXPN studios is heavy and light at the same time, and makes a great precursor to this set of Murder Mart highlights, which also includes the explosive single “Freon Dumb” (which sounds to me like the melodic sensibilities of Catherine Wheel with the sneering attitude of Blur), the driving “Disappearing In Yucca Valley” (love the beat on this one), and “Honeycreeper,” the moody story of a troubled high school and a fitting companion to “Ghost Dad” from the point of view of those left behind.

With O’Halloran relocated to Austin for work, Zinskē’s opportunities to get together for hometown gigs these days are somewhat rare, but we were fortunate enough to record this knockout set at the beginning of last month when everyone was in town for the Murder Martrelease party at PhilaMOCA. Watch the videos above and below, pick up a copy of Murder Marton their Bandcamp page, and spend some time over on Zinskē’s YouTube as well — the band made music videos for every song on the album, many set in the forest or the desert, they screened the whole lot at the PhilaMOCA show, and are releasing them online one by one. “Mode Fatigue,” the most newest, features a gripping performance by actor Damien Wallace.