Outdoor concert season is back with alt-J, Portugal. The Man, and Cherry Glazerr opening the Mann Center - WXPN | Vinyl At Heart 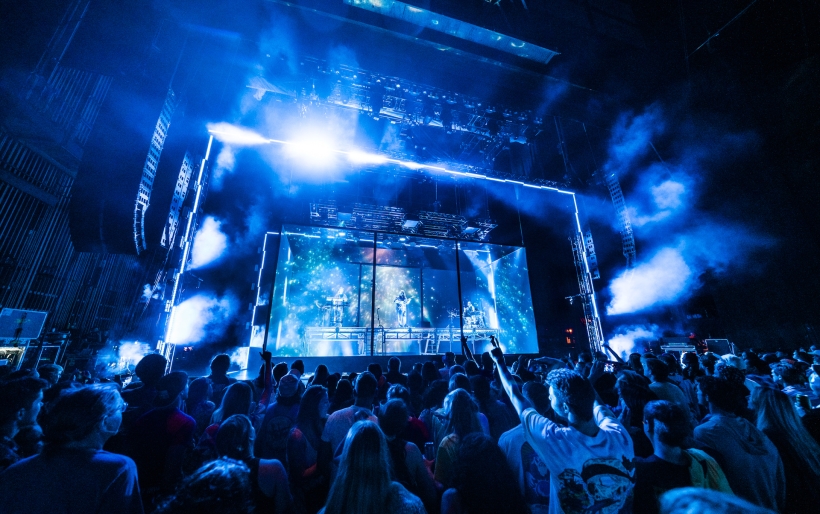 Outdoor concert season is back with alt-J, Portugal. The Man, and Cherry Glazerr opening the Mann Center

Under beautiful clear skies and 80-degree weather, the Mann’s season kicked off with one of those you-had-to-be- there type concerts starring versatile and visionary modern rockers alt-J with Portugal. The Man and Cherry Glazerr.

This past Wednesday April 13th marked the official beginning to the outdoor concert season in Philadelphia with almost 80-degree weather leading into the opening night at The Mann Music Center in Fairmount Park. On the lot the grass is green, the tailgates are down, and people are enjoying the warm spring vibes ready to celebrate with alt-J, Portugal. The Man, and Cherry Glazer on their second to last tour date in the USA.

Inside the gates, LA based grunge-punk outfit Cherry Glazerr kicked off the evening with a quick eight song set starting off with “Told You I’d Be With The Guys” and turning up the dial with the their head-banging hit “Daddi” halfway through. On stage the giant teddy bear that leans against the drummer’s kick drum was also seen on social media with the Philly famous Paul Vile AKA The Jelloman in The Jello-Van with a Cherry Glazerr Jellogram.

After a quick set break, the house music cut and began to play a pleasant violin tune, immediately recognizable as the It’s Always Sunny In Philadelphia intro tune which brought smiles and all the attention to the stage. Portugal. The Man frontperson and activist John Gourley took the microphone invited representatives from We Are The Seeds, an organization that amplifies Indigenous peoples voices through art and culture, to speak about the native land they were performing on and blessed the performance and audience with a traditional drum prayer.

Shortly after the prayer, the band set the tone with heavy guitar and drums for a metal medley covering Metallica’s” For Whom the Bell Tolls” Slayer’s “South of Heaven” and Pantera’s “Cowboys From Hell.” The giant LED backscreen was set to look like a 90s-style home video with HUD settings bordering the center frame where the live concert video feed was displayed. Throughout the set comical gags would appear like “I’m The Trash Man” (another Always Sunny) reference, a rearview parking camera guide, and infinity effects out of a grunge style music video from 2000s.

Down in the pit people were going crazy for Portugal. The Man performing their hit track “Live in the Moment” off 2017’s Woodstock. The fog was so dense you can barely see the band on stage, but that doesn’t stop this crowd from throwing their hands up and dancing to the beat.

This group completely embodies the “Never Let Them Know Your Next Move” TikTok trend by smashing their own tracks like “Creep In a T-Shirt” and seamlessly transitioning into Nirvana’s “In Bloom.” Mid-set they came in with yet another Always Sunny reference, completely covering the Charlie Day “Dayman” bringing screaming fans together for the verbal “AH-AH-AH” lyrics. At one point in the set, I recognized a breakout into the epic guitar solo to Pink Floyd’s “Time” which teased the “Another Brick in the Wall Part 2” transition after their 2018 Grammy Award winning track “Feel It Still.” Other notable tracks include their new single “What, Me Worry?”, “Purple Yellow Red and Blue” off their 2013 album Evil Friends, and a powerful performance of “Senseless” where the screen lit a call to action calling for freedom in Yemen, Ukraine, Afghanistan and Ethiopia. 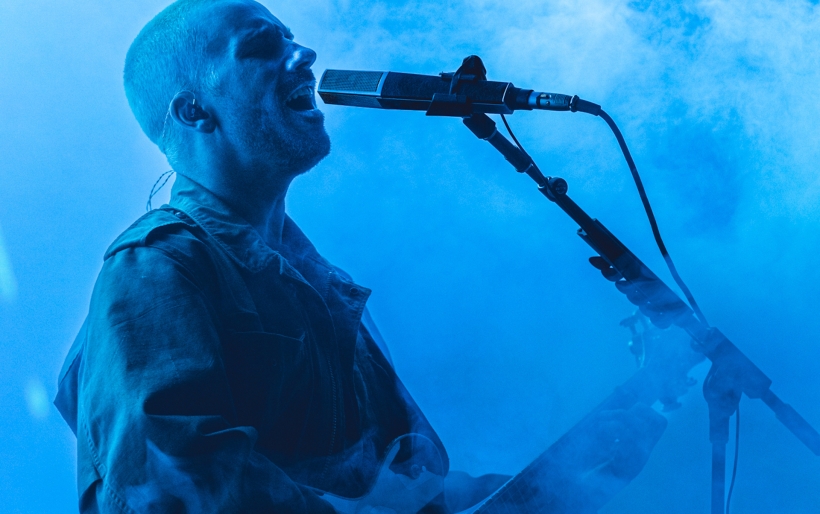 Portugal. The Man | photo by Dylan Eddinger for WXPN

The stage crew drew up a giant black curtain covering the entire stage as they prepared for the final performance of the night, leading folks to believe that alt-J is preparing a special production for them. After about a half hour of prep the curtain dropped and the three-piece band took to the stage guided by flashlight; except this time, they walked up on an elevated platform 8ft off the stage as massive screen-like cage fell covering the band from all sides. From the darkness, the screen began illuminating with candles all over as lead guitar/vocalist Joe Newman strummed the somber intro track “Bane” to their new album The Dream. On the rail fans, watched in awe trying to fathom the visuals unfolding in front of them (I still don’t know how they did it). The band finished the track fading the stage into black and brought the beat up with “Every Other Freckle” accompanied by impressive bright lights surrounding the setup and trippy colors running through the band.

The production of the show was truly mind-melting experience back at the soundboard. It was a perfect location to take in all of the stage visuals and see the crowd sway and dance. During “Tessellate” the Mann took a dive deep in the ocean, where a shark paced across the stage nodding to the “You’re a Shark and I’m Swimming” lyrics in the song before being encountered by a group jellyfish and other schools of fish. Immediately after, we went from the sea floor on a bass-powered spaceship to the surface of the moon as they played their newest single “U&ME.” After some dancing and grooving, Newman said to the crowd “I think you might know this one” and encouraged the audience to sing the chorus to “Matilda”, even giving the crowd’s voice the spotlight without the band’s instruments. Late in the set alt-J gave their love to the city by performing “Philadelphia” before closing the set with “Fitzpleasure”. To show their support for people of Ukraine, the screen displayed the blue and yellow flag during their quick break. The group returned to the stage for a three-song encore comprised of “Left Hand Free” “Hard Drive Gold” and their Platinum hit “Breezeblocks”.

Looking back on the show, this is one of those you-had-to-be- there type experiences. Absorbing the stunning visual effects paired with the body shaking sound in the open air at The Mann is going to make this one of the best shows of 2022. Also, the lineup for this tour is just amazing. alt-J, Portugal. The Man, and Cherry Glazerr wrap up their 2022 North American Tour in Toronto Sunday night. alt-J will performing again in the UK to celebrate the 10 year anniversary of their debut album An Awesome Wave by playing the album in full, and will appear on NPR’s World Cafe later this spring.