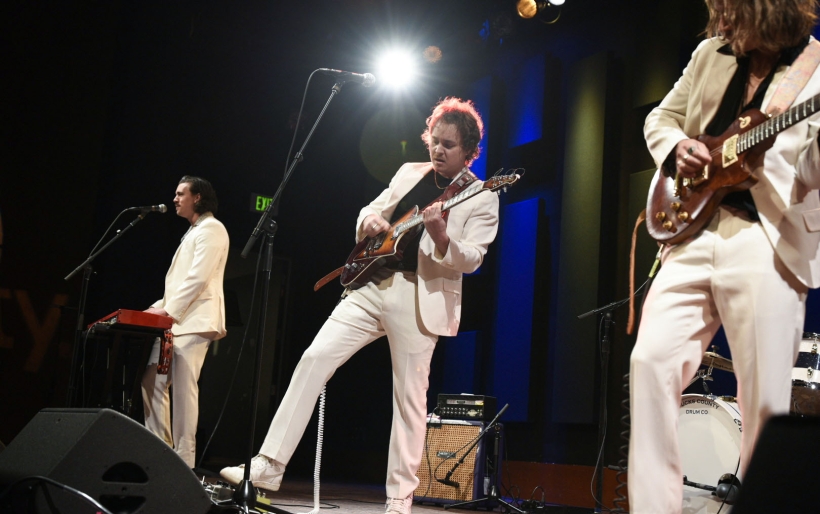 Before going on tour with The Black Keys, Ceramic Animal warmed up their dynamic live set at Free At Noon, showcasing their new album Sweet Unknown.

Over the past five years, the Doylestown-rooted brother band Ceramic Animals has quietly shaped up into one of the most compelling live bands in modern rock, so much so that Dan Auerbach of The Black Keys took notice, produced their excellent new record Sweet Unknown, and released it via his label Easy Eye Sound last month.

This summer, Ceramic Animal goes on tour with The Black Keys, playing the Waterfront Music Pavilion in Camden in July. Before they hit the road, the brothers Regan — Chris on guitar and vocals, Erik on drums, Elliott on keys — and their bandmates Anthony Marchione on guitar and Dallas Hosey on bass warmed up with a Free at Noon concert this week, decked out in their trademark matching white tailored suits.

Sartorial choices aside, this set was all about musicianship, from the twangy country groove of the new “Up In Smoke” to the back-to-back guitarmonies on “Mistakes” from their 2016 debut The Cart. The single “Tangled,” which has been getting a lot of play on WXPN, is even catchier live than it is on the radio, and the title track from the new album is a dynamic ride, from the mellow simmer-down beginning to the full-throttle jam at the end.

Speaking of jams, “All My Loving” from 2020’s High End — a tidy nine minutes on record — was stretched out to 11 and a half minutes live, traveling from swift disco to barreling blues and back. “Seems like everyone’s having fun,” said Chris. “That’s fun.”

Similar to last week’s F@N stars Fontaines D.C., Ceramic Animal wasn’t much for conversation, but the set finished strong with another throwback to The Cart, “Dreams Via Memories,” and two more from Sweet Unknown, the classic rock styled “Long Day” and the propulsive jam “I Can’t Wait,” which brought the sent to a finale with feedback and shredding.

Take a listen to Ceramic Animal’s entire Free at Noon performance below. The band headlines Anchor Rock Club in Atlantic City on Friday, May 6th. Tickets and more information can be found on the WXPN Concerts and Events page.