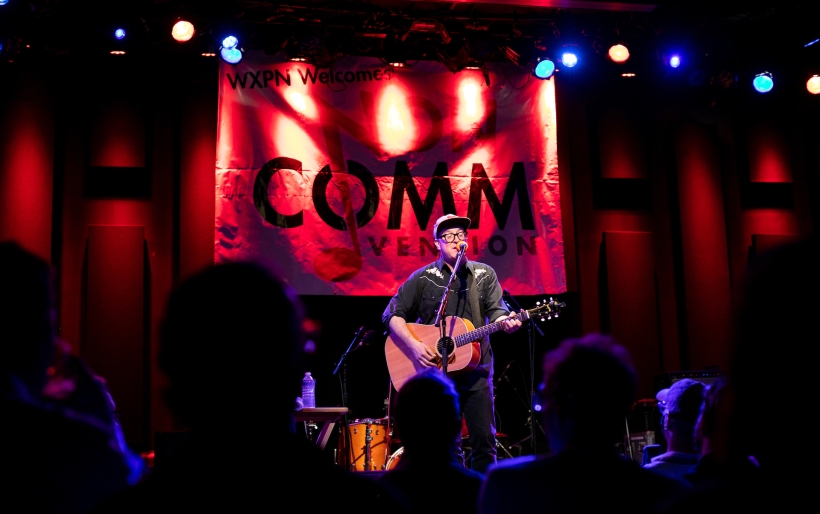 The Hold Steady frontperson Craig Finn showed up at #NONCOMM at a moment’s notice to sub in for Hurray For The Riff Raff and win one for the home team.

It’s officially Phillies season, so allow me to reference our great American pastime. It doesn’t happen often, but every once in a while a team will summon a pinch hitter to make a quick substitution, only to have that player become the hero and knock a ball deep into the seats for a game winning home run. Tonight at NON-COMM 2022, Craig Finn turned out to be just that hero, showing up at a moment’s notice to sub in for Hurray For The Riff Raff and win one for the home team.

If you are not familiar with Craig Finn as a solo act – and if not you should change that soon – you’ve likely heard him perform as a part of his primary band, The Hold Steady. In either case, Finn has made a name for himself as one of indie rock’s premiere storytellers, and Tuesday night showed just how skilled of a yard-spinner he truly is. He played primarily songs off his upcoming solo record A Legacy Of Rentals (due out 5/20 on Thirty Tigers) which meant the audience was hearing much of this material for the first time, something that may lead lesser songwriters with a challenging prospect of how to hold the audience’s attention.

This was no issue for Finn, whose songs — like great short stories — grab you from the first sentence, dragging you through the lives of their often downtrodden heroes. Look no further than the set’s opening song, “Messing With The Settings” (also the first single off his new record) for an example of his unique abilities. Though largely spoken word, the song’s chorus is enough to knock straight on your back. “Sundown, it feels like I’m riding a train I’m not on,” he sings in what turns out to be a final eulogy.

In keeping with that somewhat somber, but always hopeful, mood, Finn took a moment to pay tribute to his good friend Bryan Dilworth, of Electric Factory / Franklin Music Hall fame, who passed away in 2020. Dilworth was a mainstay of the Philly music scene, promoting concerts in Philadelphia for decades, and Finn said that Dilworth had a big influence on A Legacy Of Rentals, as his death made him consider how we remember those that are lost, an idea reflected within the set on songs like “The Amarillo Kid” and “Jessamine.” As it turned out, this pared-down set, done more by necessity than choice, was the perfect vehicle for Finn’s thoughtful ruminations.

See photos from the performance below; Finn heads to Toronto tomorrow to link up with the rest of The Hold Steady at Horseshoe Tavern, a gig he promises won’t conflict with the Maple Leafs game. More at the band’s website, more on A Legacy of Rentalshere.