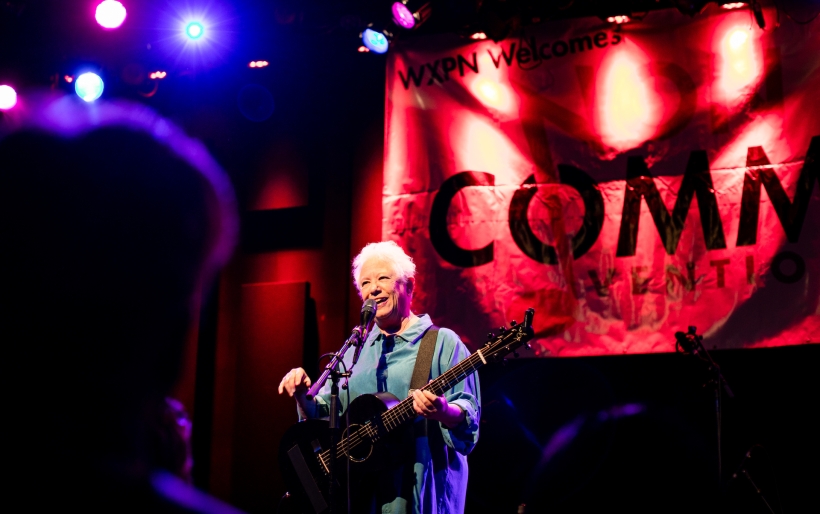 Since the age of 12, Janis Ian has been playing music rooted in non-conformity and social justice which still resonates in 2022 — as we heard in this NON-COMM performance.

Standing with just her voice and guitar, American singer-songwriter Janis Ian delivered a powerful performance on the World Cafe Live stage as a part of the 2022 NON-COMM conference. Since the age of 12, Ian has been playing music rooted in non-conformity and social justice which still resonates in 2022.

Ian started with “Society’s Child,” her first big hit which details being in an interracial relationship in the 1960s. The lyrics “When she wouldn’t let you inside. When she turned and said but honey, he’s not our kind,” cut through like a knife. Ending with a dissonant chord that slowly melted into resolution punctuated the song.

Between the opening song and following it with “Resist” off her newest album The Light at the End of the Line, she talked how, about after 50+ years in the industry, having complete creative control of her final album gave her an immense amount of freedom and ability to make the perfect record.

“Resist” is a powerful ballad that paints Ian’s life living as a woman not bound by the standards society places on her. The track goes through many peaks and valleys in energy. Reaching a low with an a cappella bridge singing “But you raise up your fist and you learn to resist. And you say, I will not disappear,” the song built up to a hard-hitting, almost head-bangable, ending.

Ian recounted how she was admiring her name on a marquee outside a venue when a mother came up to her and said “here is my little boy he was raised on your music” and the little boy humorously replied “are you still alive?” She dedicated her song “I’m Still Standing” to the little boy.

Ian ended her set with “At Seventeen.” She made it sound like a full band was on stage with just her voice and guitar; your ear seemed to fill in the blanks where strings, drums, and bass would be. Her performance was powerful and the control she has with her vocals after so many years of playing is impressive.

Janis Ian plays the Scottish Rite Auditorium on Thursday, followed by a gig on Friday at the Ocean City Music Pier. Details can be found at the XPN Concerts and Events page.