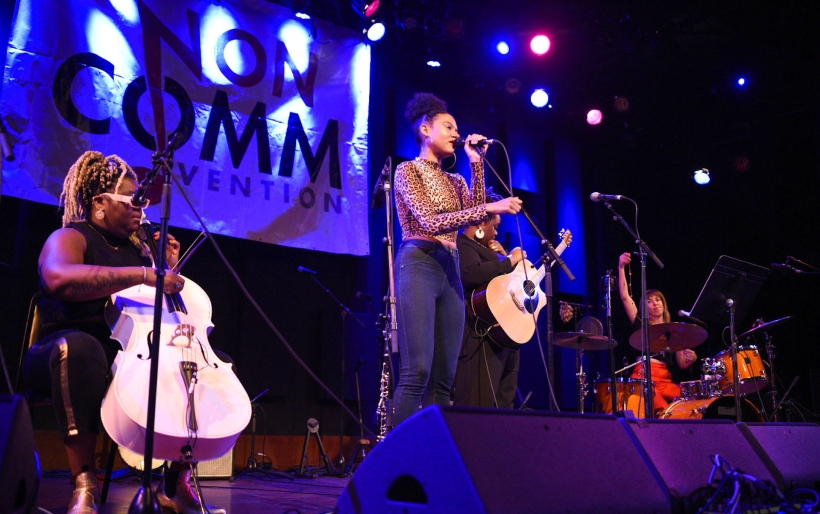 From the madrigal-esque vocals of opener “Hy-Brasil” to the uplifting gospel-country energy of the closing “Nightflyer,” singer-songwriter Allison Russell‘s Free at Noon performance kicked off day two of NON-COMM with a dynamic range of sounds, and emotional content at its core.

Russell is a multi-instrumentalist and activist from Montreal, and a member of the Our Native Daughters folk collective alongside Amythyst Kiah, Leyla McCalla and Rhiannon Giddens. Her debut solo album, Outside Child, was released in 2021, and received critical acclaim; World Cafe‘s Nashville correspondent Jessie Scott said “despite creating art from trauma, Russell is strengthened by love, connection and creation. The blues stirs the soul, bringing with it catharsis and joy.”

The ensemble Russell worked with to bring the record to life onstage was steeped in left-of-center subtlety; the duo of SistaStrings (Chauntee and Monique Ross on violin and cello) provided the low end and leads, while acoustic guitarist Kyshona and drummer Beth Goodfellow handled the rhythmic foundation; Russell would sometimes lead the group with warm clarinet tones, other times she’d sing and groove.

Speaking to the emotional underpinnings of Outside Child, Russell introduced “Persephone” by sharing how it was inspired by and dedicated to her first romantic partner, telling the crowd she helped get her out of an abusive situation as a teenager at home. “We find our courage in all kinds of places,” Russell said, listing a rundown of places she found refuge, from the public library to Shakespeare in the park. “I was safer there than I was at home with people who called themselves my parents but were really jackals in disguise.”

Russell’s stage banter bordered on the poetic, and while the themes were unflinchingly heavy, the music transformed them positively into spaces of warmth and hope, particularly on “Poison Arrow,” where lyrics in French intoned “I wish for second chances, I wish for all of us peace.”

Outside Child is out now, and Allison Russell returns to Philadelphia on August 15th, opening for Brandi Carlile at The Mann Center. More information can be found at the XPN Concerts and Events page.