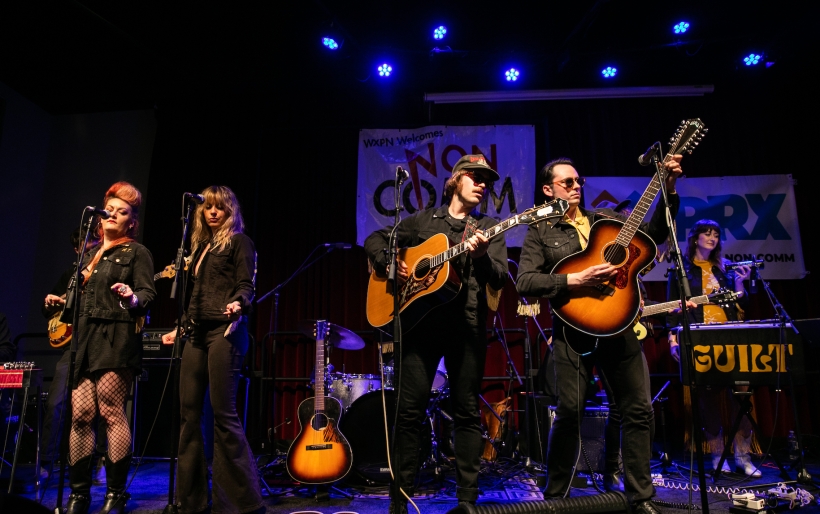 Cosmic Guilt opened up NON-COMM’s second evening showcase with their brand of dreamy country music in tight and fun-filled set. The 10-piece Philadelphia based Americana band is fronted by James Everhart and George Murphy, and the duo sung in well-balanced harmony. And with the help of Jillian Taylor and Hannah Taylor — the latter of whom also sang with Ben Arnold last night — the layers of vocals blended beautifully.

“Cautious Lovers” started off their set and the band quickly dispelled the idea of “too many cooks spoil the broth.” You could hear each instrument, from the smashing of the crash cymbals to the delicate twinkle of the bells. Everyone had their own place in each song, and all of this gives Cosmic Guilt a sound of their own. The members are carefully listening to one another, which allows for great interplay among the instruments. Their vibe on stage is fantastic — at no point are any of their 10 members static or staring off into the distance. All of this is boosted by their uniform of black jackets with golden tassels and the band’s name embroidered on the back.

“Greener Leaves” and the titular “Cosmic Guilt” followed next, both featuring great pedal steel playing by Zena Kay, whose solo on “Greener Leaves” in particular was magnificent. (Who doesn’t love the sound of pedal steel?) After the a cappella breakdown on “Silver and Lead,” they launched into an energetic jam to wrap the set, and everyone in the band was smiling from ear to ear, and with a beautiful fingerstyle outro, the hoard of musicians walked off stage.

Cosmic Guilt is an homage to the past but looks into the future with their sound; they are far from a country novelty act and are on a path to innovate Americana. Their self-titled debut album is out now, and they’ll return this September to play the XPoNential Music Festival. Listen to their NON-COMM set below