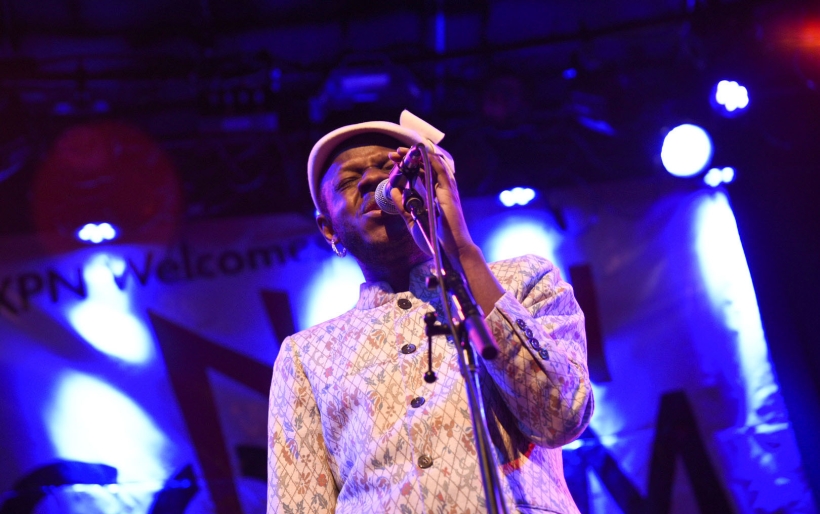 With a voice smoother than anything you can imagine, Ondara’s four-song NON-COMM set was enchanting!

They say you don’t get a second chance at a first impression but, in the case of Ondara, an exception might need to be made. The Minneapolis-via-Nairobi singer-songwriter opened The NPR Music Stage for night two of NON-COMM 2022, and started the show by sharing the trials involved in his last performance on the World Cafe Live stage. When he played Free At Noon back in 2019 through a nasty sickness, his voice was severely hampered, leading to what he felt was a less than stellar show. There were no such limitations on this night and Ondara was a delight from the opening notes.

The truth is, Ondara made a statement even before he even began playing. Sporting a white, intricately-patterned suit, a bowtied hat, and platform shoes, Ondara sauntered on stage as a man unbothered, rocking an outfit this writer could only dream of having the aplomb to pull off. Then, of course, came the music. Namely, the vocals, the only thing smoother than that pristine get up. You could almost imagine, as he belted out the opening notes of his hit single “Lebanon”, that the microphone inches from his face was more for show than anything else. Ondara’s voice is such a powerful, buttery force that all loose chit chat hovering around the edges of the room hushed almost immediately, each corner drawn closer to its smoothly charismatic center.

After being accompanied by piano for the first couple songs of his night, Ondara took the chance to play “the troubadour,” ending the set with two brand new songs. So new, in fact, that even Ondara had forgotten the names. But their names hardly matter with a talent such as his, who showed just how well he knows his way around a velvety love song.