Sugaray Rayford has no time for regrets at #NONCOMM - WXPN 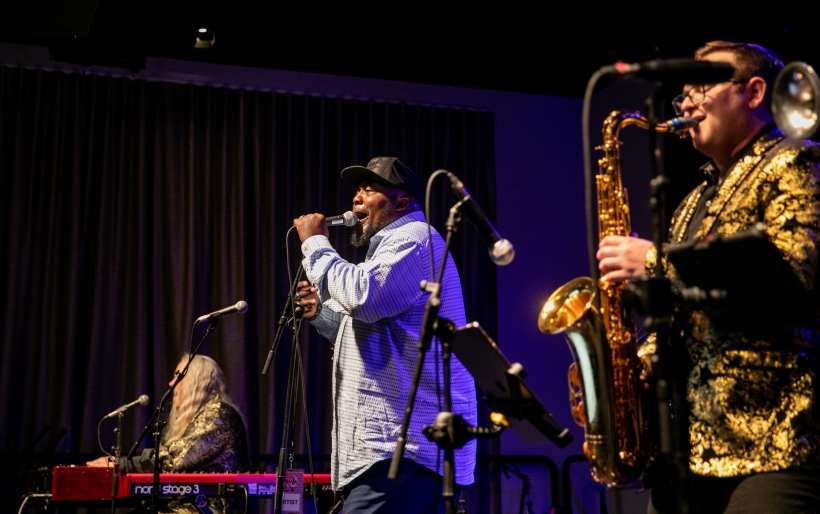 “If you die with no scars or patches on your body you didn’t do it right,” commanding Texas funk-blues singer-songwriter Sugaray Rayford told NON-COMM

The infectious moves and attitude from Sugaray Rayford commanded the crowd’s attention at the PRX stage on day two of NON-COMM. Backed by a knockout band, you could not resist the Texas songwriter’s brand of R&B, funk, and the blues. Drummer Ramon Michel stomped a four-on-the-floor groove on their first song “Into Deep” to guide the crowd; everyone in the room was moving along.

After a quick break, Rayford talked about his time in the army and his struggles with PTSD. “Invisible Soldier” was his way of putting this into words, but noted how he did not want it to be a sad song, so paired the serious lyrics with a funky gospel groove. During the song’s instrumental breakdown Rayford showcased his moves, then punctuated it with “I’m too old for that.” Then again, as he said later, “If you die with no scars or patches on your body you didn’t do it right.”

Each direction you turned your head people were overjoyed to hear Rayford, and with a fist full of beads he showered the crowd with new necklaces before “No Limit to my Love”. The song slowed the set down but the rhythm section kept the crowd locked in with the groove. After slight technical difficulties with guitarist Danny Avila’s wireless setup, they went into their last tune “Don’t Regret a Mile.” The song implores the listener to not live your life regretting the past when you have your whole future ahead of you.

As the crowd slowly funneled out, with a few stragglers staying to request one more song, murmurs of newly created fans filled the lobby. Check out Rayford’s 2022 album In Too Deep here, and catch him at 118 North in Wayne tomorrow night. Below, listen back to his NON-COMM performance.