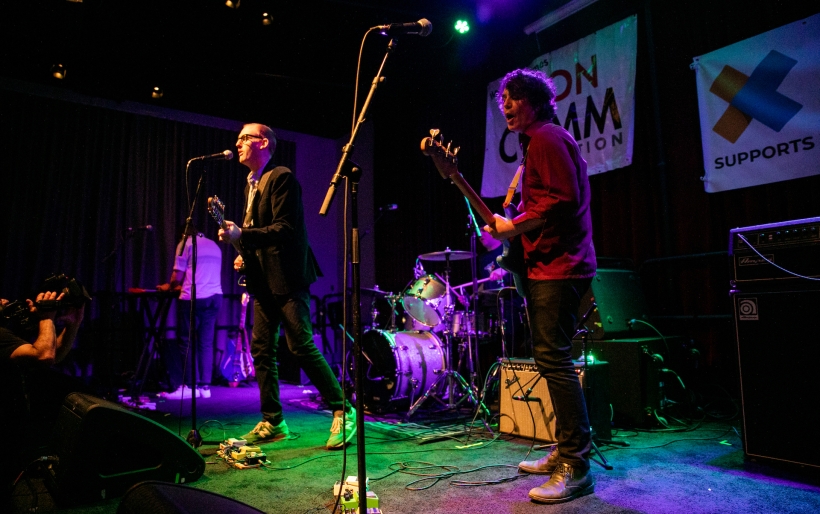 Kiwi Jr. treated the audience to a suite of new songs from their yet-to-be-named album coming out later this year.

Toronto indie rockers Kiwi Jr. closed out the PRX stage on day three of NON-COMM with an energetic set of indie pop songs. “Cooler Returns” led the pack with simple drum grooves and dueling guitars; towards the end, lead singer Jeremy Guadet and guitarist Brian Murphy each played a lick in unison. The sound of the six-string Rickenbacker and 12-string guitar stuck in your ear till the sudden brickwall ending.

Kiwi Jr. treated the audience to a suite of new songs, including their new single coming out May 18th. “The Sound of Music” features wonderful storytelling through Guadet’s lyrics, and his Stephan Malkmus/ Jeff Tweedy vocal inflection worked well for this song. Ending the tune on a sour note was perfect even if “musically incorrect.” The jangle pop sounding tune “Unspeakable Things” was a nice throwback to 80s indie rock, with synth sounds that gave it a cloudy dream-like feel and a percussive build-up into a rockin’ chorus.

“Nightvision” continued the dream-like sounds with Murphy using the somewhat gimmicky E-Bow to create a string section sound. The set came to a close with “Waiting in Line,” an infectious surf rock indie song. With the news of the band’s next album coming soon and the energy to back it, Kiwi Jr. is ready for the big stage. Listen to their performance, check out their album out May 18th on on Sub Pop, and catch them at Johnny Brenda’s on July 31.