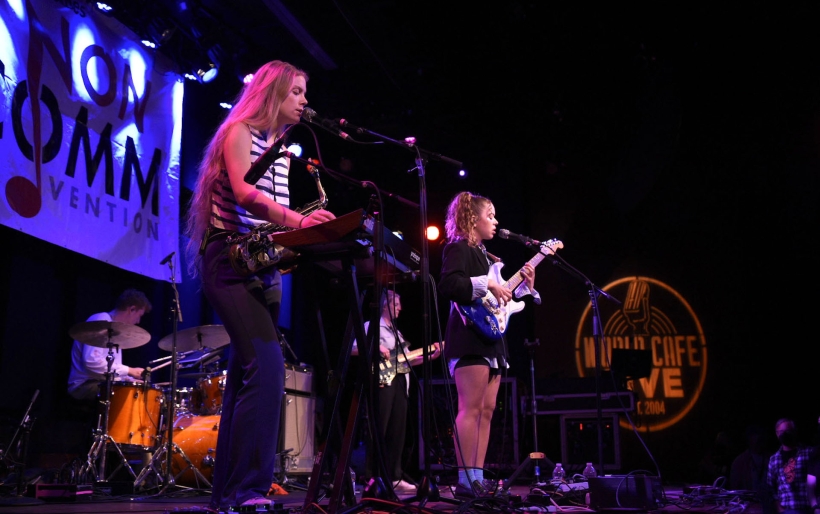 Nilüfer Yanya’s new album PAINLESS brings a whole spectrum of themes, from intimacy to cataclysm, and her four-piece band excelled at depicting these contrasts at World Cafe Live.

Nilüfer Yanya and her band always come off as low-key, but they can really light up the stage when they want to. The London-based songwriter released her sophomore album PAINLESS in March on ATO, threading indie pop, electro and R&B together with moments of blistering guitar rock, too. The impressive project follows her 2019 debut Miss Universe,the futuristic Feeling Lucky? from 2020, and a few earlier EPs of sly, catchy bedroom pop that first made her one of my favorite musicians working today.

As Miss Universe did, PAINLESS brings a whole spectrum of themes, from intimacy to cataclysm, and the four-piece band excels at depicting these contrasts, the calm and paranoia. As usual, drummer Luke Bower destroys: his booming, asymmetric breakbeats build foundations for “the dealer” and “stabilise,” underneath Yanya’s tight guitar chords, sugary synth and saxophone parts by her other longtime bandmate Jazzi Bobbi on top. Mechanism weighs heavy on this album, as Yanya sings, close and withholding, her way through layered instrumental fractals, patterns all pumping like wheels. Her live versions breathe a little more, but still creepy and candescent – as ever on my old favorite “Baby Luv,” centering her signature clean chorus guitar, and her biting PJ Harvey cover, “Rid of Me.” I remember feeling their poise when I saw the band at XPNFest in 2019, and today they’re still totally in control.

Find photos of Nilüfer Yanya and her fantastic band at NONCOMM below. They played Philadelphia’s Underground Arts on May 4th with Tasha and Ada Lea – plus, stopped by Repo Records to sign some new vinyls – and their tour continues May 6th in Massachussetts.