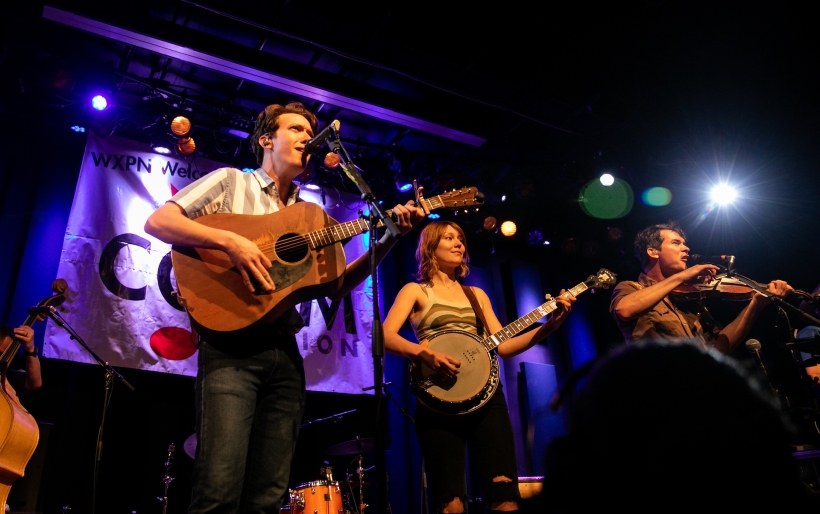 On Tuesday afternoon, most of the music industry folks arriving at World Cafe Live for the week would probably have agreed that screaming along with a smokin’ bluegrass cover of “(You Gotta) Fight For Your Right (To Party)” was not on their #NONCOMM bingo card. And yet here we were, late Thursday night surrounded by many plastic cups half full of IPAs and many voices joining in unison — “Oh mom you’re just jealous, it’s the Old Crow boys!”

The Virginia-rooted, Nashville-based string band Old Crow Medicine Show is coming up on the 20th anniversary of their self-titled debut album; they’re sharper players than ever, from Ketch Secor’s nimble fiddle playing to Jerry Pentecost’s magnetic drumming, and the “entertainer” side of their craft is in equally top form. Their set felt like part jam session, part stand-up comedy, part variety show revue, with a folk rock concert in there as well.

Despite the looming anniversary, Old Crow was situated in the here and now for this performance, with six of the set’s eight songs drawing on their new Paint This Town album. The mood ranged from the hoedown energy of “Lord Willing and the Creek Don’t Rise” and “Paint This Town” to the campfire burner ballad “Gloryland.”

The interplay of Old Crow’s six musicians was a big part of these songs, but the weight of the lyrics can’t be overlooked. “DeFord Rides Again” in particular addresses the erasure of Black musicians in country music, specifically DeFord Bailey — “for our city’s biggest shame, they whitewashed his name.” Pentecost sang this song, and guitarist Mason Via introduced him, saying it’s about the “legacy of a fallen soldier, a pioneer in country music, a man you probably never heard of, but now you know.”

Later, “Used To Be A Mountain” tackles environmental issues, over development and depletion of resources, though there’s certainly a more direct way to put it. “We can say ‘eco terrorism’ and this crowd won’t get scared,” Via told NON-COMM. “You can’t say that back home.”

Singer-songwriter Molly Tuttle came out as a surprise guest on “Bombs Away” — a song from Paint This Town that she co-wrote and recorded with the band — and it was a swift two and a half minutes of high harmonies and slick leads; a massive singalong to the iconic “Wagon Wheel” followed, with the surprise cover to conclude the set. Via said they’d been asked to play a song by a Philly musician for the last song of the last night-time show at this year’s NON-COMM. “And we thought about it, and even though this wasn’t a local tune, it has the same surliness and good-natured cut-throatedness that you find in the City of Brotherly Love. It’s good to be in a Quaker-run town because everyone is a pacifist and you don’t have to lock your doors.”

Funny, yes. But funnier to hear the band launch into the iconic punk rock hip-hop Beastie Boys rager from License To Ill, complete with unhinged fiddle and banjo solos. Listen to their set below; Old Crow Medicine Show’s Paint This Town is out now via ATO Records, and their 2022 tour continues Friday at Webster Hall in New York.