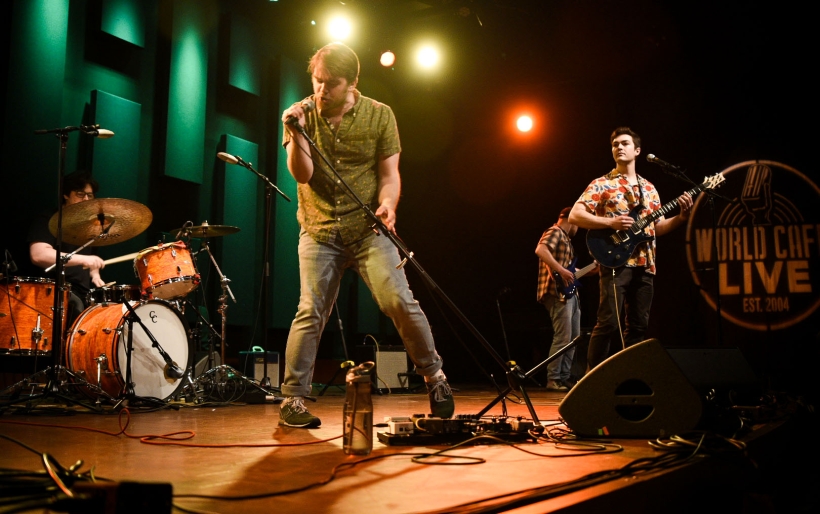 The Tisburys | photo by Paige Walter for WXPN

Returning to the Free at Noon stage, local act The Tisburys showed they have the energy for the XPoNential Music festival.

Local power-pop group The Tisburys gave a commanding performance on the World Cafe Live stage today for XPN’s Free at Noon concert series. The quintet has been active for the past 5+ years with two fulllength albums under their belt and a third coming in fall of 2022.

The Free at Noon audience was treated to some classic Tisbury cuts along with some tracks from the upcoming album. “Tear Us Apart” started the show with an upbeat danceable groove. Lead singer Tyler Asay sang “It’s a crapshoot followed by a total disaster,” in a humorous description of a turbulent relationship. The studio cut of “Tear Us Apart” is very reminiscent of “We Didn’t Start the Fire” by Billy Joel, mostly in Asay’s voice and the synth lines played by Jason McGovern; live, it has raw rock and roll energy.

Previewing the upcoming album, The Tisburys played “Garden” and “Harmony, NJ” which have yet to be released as singles. “Harmony, NJ” has a funky groove that perks up the listeners’ ears as they try and find the down beat. Drummer Dan Nazario syncopates and moves the rhythm around inside the 4/4 time signature, which is paired with guitarist John Domenico’s math rock sounding riffs switching the sound up.

Into the next song “Fading Light,” McGovern shined again with a lush synth string sound that would not be out of place on an upbeat track by Smashing Pumpkins or The Cure song. This track flowed well with the closing song “In the Moonlight,” where huge tom fills pushed the energy up into a powerful ending. Asay’s presence on stage was captivating, as he shot off a huge fill by McGovern right into a wailing guitar solo to end their set.

Check out The Tisburys live at Ortlieb’s on May 29, Dobb’s on South on June 26th, and at XWXPN’s XPoNential Festival 9/16 and 17. And follow them on social media at @the_tisburys for more info on their upcoming record.