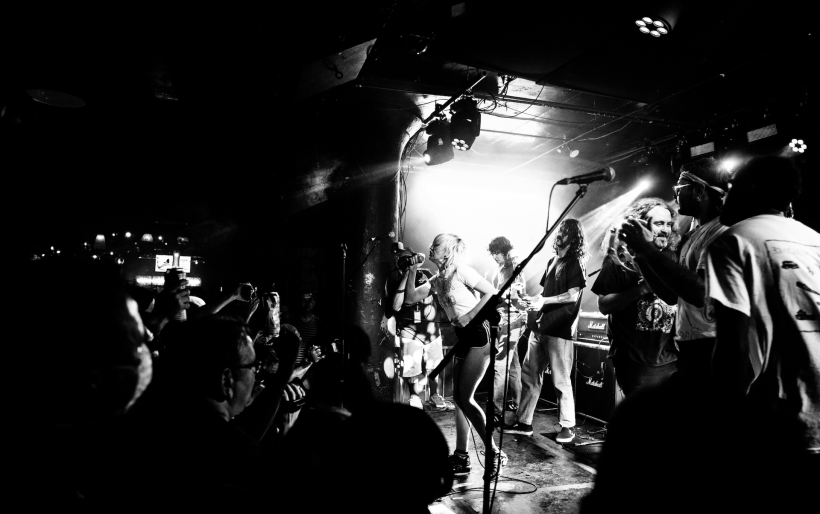 Amyl and the Sniffers | photo by Skylar Watkins for WXPN

The Melbourne band delivered a true punk rock show in a sea of modern day imitators in Philly on Saturday.

If you’ve never been to an Amyl and the Sniffers show, it’s definitely not for the faint of heart. Saturday night, the Melbourne, Australia band played a very sold out show at Underground Arts on the penultimate show of the American leg of their Comfort to Me tour.

The band started off the show by explaining that it was a special night for them, as the Australian election results had come in and their conservative prime minister Scott Morrison (Sco-Mo) was ousted. Vocalist Amy Taylor donned a homemade t-shirt that read “FUCK OFF SCO-MO” written in black sharpie. The band and a few guests they invited up to the stage joined together in a song to celebrate. Homemade shirts turned out to be a theme at this show; a few songs in a fan threw Taylor another sharpie made t-shirt that read “FUCK MILEY CYRUS,” which Amy wore for the rest of the show proudly.

Showcasing the tracks from last year’s Comfort To Me album, as well as Amyl and the Sniffers’ 2019 debut, and other odds and ends, their gig at Underground Arts was a true punk rock show amidst a sea of modern day imitators. This was the second show I’ve seen of this tour, and both times the crowd was full of rowdy fun – moshing, crowdsurfing, stage diving, and other antics. The band matched this energy, with Amy Taylor going as far as spitting her beer in the face of a stage diver. It’s a show where no fucks are given, in the best way.