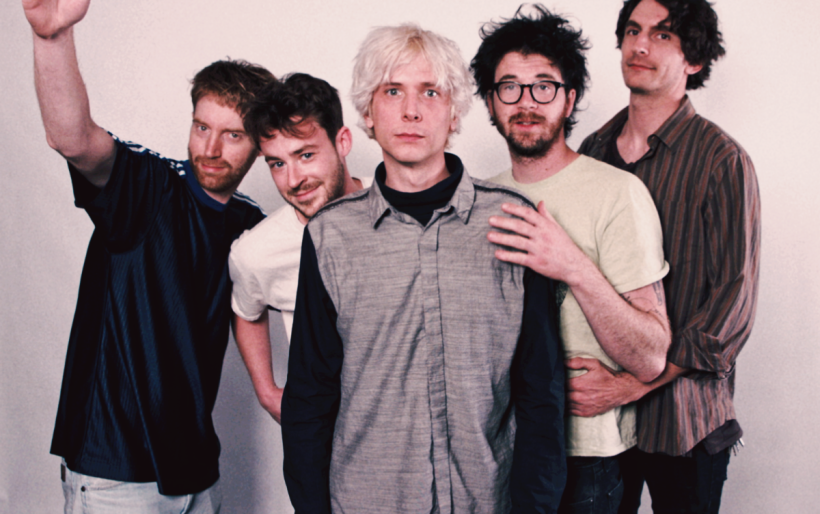 The latest from the Philly psychedelic five-piece is a passion project of sorts introducing their fan base to the work of Japanese alternative rock band Fishmans.

His obsession for the group growing with each day, Abrams sought out English translations for some of their songs, and as the COVID lockdown wore on, he and his bandmates started work on what became their next project: I LOVE FISH, an album paying homage to this band who, in the 23 years since frontperson Shinji Sato’s passing, have garnered a devoted following in online communities.

After deciding to pursue the tribute project, Abrams got the blessing of Sato’s copyright successor and enlisted the help of his friend Rae Sakakibara, who is fluent in Japanese, to render the songs in English translations. I LOVE FISH is out Friday on GrindSelect, and Abrams sat down with me last week, along with bandmate Brad Pulley, to chat about the album — including its epic 30-minute long closing track “Long Season” — as well as the mission of spreading the gospel of Fishmans, and what it was like to work on a project this niche.

Will Kirkpatrick: When you started the project, and the copyright successor gave you his OK, did you still feel a hesitation towards taking this on? Fishmans means a lot to a lot of people, and it is a pretty intimidating project to take on. What was that like?

Keith Abrams: I think the whole time there was a bit of hesitation. We wanted to make it clear to them that this is a passion project for us.

WK: So it is more for you as a band, and not a “Oh we think this is going to be some huge record.”

WK: When you are in the process of writing, would you say you frequently find a new artist or album that inspires you to – in this case, make a whole cover record – [or] write a new batch of songs?

KA: No, not very often. The first time I heard Fishmans, it kind of opened up a whole new world for me. Like, hearing “Long Season” really changed everything.

WK: When you were figuring out which songs to choose, were you looking at what songs impacted you the most, or did the ease of the translated lyrics fitting with the music determine it?

KA: The original idea was to do a whole cover album of [live album] 98.12.28, but it’s very long, as there are a lot of songs. There were some songs they did not play at that show that we wanted to cover as well. So we decided to take our favorite songs – some of them did not work, so we had to scrap them.

Brad Pulley: It was a multiple-angled decision which songs to use. We ended up doing songs which we loved the most, but felt like they could be done by us in a way where we could still do something different with it, and still come across similarly. Was it just one or two songs we ended up scrapping, Keith?

KA: I think it was only two, but in the beginning the list of songs was very long and we were like, “We can’t do all these songs.” So we just narrowed it down to the ones that would make the best compilation of songs and best tribute to Fishmans.

WK: When recording, did you do a live recording of the songs and cut it like that?

KA: No, it was during quarantine when we started this. A lot of the songs I would start and then I would have him [Brad] record certain parts and then I would put them into the project. I am roommates with both Alex’s [keys player Alex Beebe, drummer Alex Held], so we could record together.

BP: A lot of the tracking for the album was pandemic era, a lot of file sharing and stuff. But as we were finishing the record, about a year and a half into the pandemic, we were able to finish the record when we were vaccinated and felt comfortable being around each other. A lot of the mixing and final things we were able to do together.

WK: With a bigger song like “Long Season,” how did you wrap your head around where to start with it?

KA: “Long Season” we divided it up into four parts. Me and Brad listened to it multiple times and both of us wrote stuff down.

BP: Basically ‘Long Season” was done with musical tabulation that Keith like came up with. We would write down the motif that was happening and tally how many measures that it happened.

KA: The original was, I think, divided into five parts, but I thought it was easier to make four projects out of it. To me it felt like four sections: beginning, chorus / vocal solo, the ambient / drum sections, and the finale.

WK: It isn’t a note by note recreation, it gives you a lot of room to put your own spin on it.

KA: We definitely wanted to put our own spin on it and we weren’t gonna do it exactly like they did…because what is the point? Just listen to the original.

WK: Was that the process for most of the songs?

KA: Yeah, and it pretty much became a rule to not use the instruments they used on the Fishmans version.

KA: Also some of the structures we changed a bit. Some shortened, some expanded, depending on how the song was turning out. We just wanted it to sound like a well thought-out thing.

BP: The mission was to do these songs and stay true to the feeling of the lyrics and the mood, but also to make it its own project and make it Keith Abrams and Pine Barons sounding. And for people who have and will listen to the whole record, I would say the spectrum is kind of like…“Night Cruising” is pretty close to the original and then a song like “Future” has all of the facets of the original but in terms of instrumentation and tempo it is a lot different.

WK: So are you planning to put some of these songs into your live sets?

BP: For anyone seeing us in July, you’ll definitely hear us play “Night Cruising.” Speaking personally, and I know the other guys agree, there are some great tracks on that album that would be really fun to play. But doing the whole record, there is so much instrumentation done on so many things it would be a big challenge. One that we would live up to, but it would be a lot of work.

WK: It is a hard balance for a band, if an audience doesn’t know you but recognizes a cover. They’re gonna like you, but you’re there to show them you and not someone else’s work. How would you decide to include a cover?

BP: It is a funny balance to hit. On one hand, [I LOVE FISH] is a cover project, but in other ways it is a very unique album, to me at least, because there is so much reinterpretation happening. If we played these songs in the set I don’t think anybody who doesn’t know Fishmans would realize we are doing a cover. I still would feel that it is a Pine Barons set. But at the same time, do we want to be spending a lot of time on the ground playing cover songs when we have lots of original material? We are still feeling out how we want to balance that out.

WK: Like you said, you have plenty of songs to play and like people’s first show with a band where they might play two originals and a bunch of crowd-pleasing covers. It may feel like you’re back tracking once you start throwing in so many covers.

KA: We should give a shout out to Rae, she helped out a lot with the translations. I would come up with these poeticized versions of the translations and I wanted Rae to make sure I was saying the right things and converting the right sentiment and in the same way [Shinji] Sato did.

BP: Rae speaks conversational Japanese so she was able to hear the real lyrics being sung, see how we translated or translated and remelodisized, and helped Kieth get the sentiment just right.

KA: That was really important, to be saying the right thing in the right way. This whole thing was to make more people aware of Fishmans because they are a very important band to music and not many people know about them. A lot of that is due to Sato’s death.

WK: Do you think the barrier between English-speaking listeners is the language, or is it more exposure.

KA: The same way I found Fishmans, in this day in age we will hear music from all over the world. They also never toured outside of Japan but I think they would have if they kept going.

WK: If you don’t speak Japanese, it’s more of an instrumental thing; you’re more just following the contour of the melody.

KA: When I first started to listen, you could feel something in his voice. And I feel like with a lot of music, people don’t listen to the lyrics.

WK: That is a good point, because the first time you listen to a song the instruments come out first and the ability of the singer to convey emotion with basically just music is more important than the words.

KA: Yeah, but after finding what the words were I knew there was something there.

Pine Barons’ I LOVE FISH is out Friday, July 8th, via GrindSelect, and can be ordered here. The band plays live on Tuesday, July 19th at Liberty Point on the Delaware River; tickets and more information on the show can be found at WXPN’s Concerts and Events page.