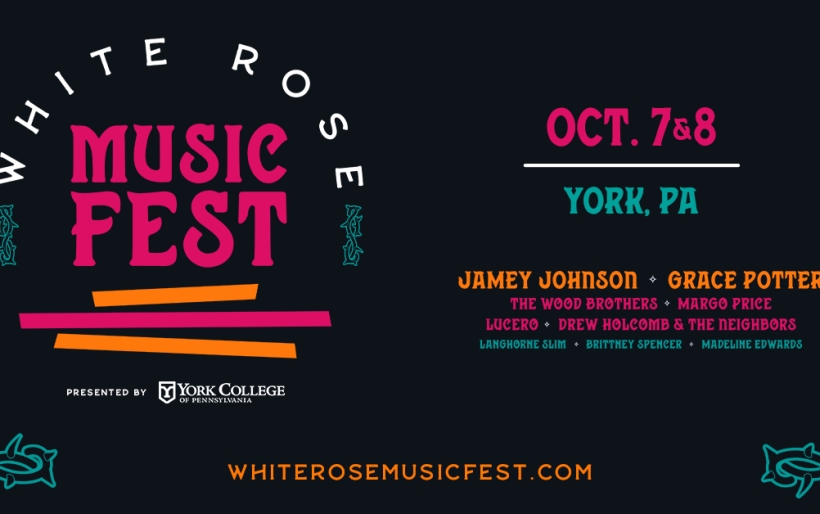 When you fill out the online contest form, your name will automatically be entered into a drawing for a chance to win one ROYAL VIP pass to White Rose Music Festival on October 7-8, 2022. The ROYAL VIP pass comes with 4 VIP tickets and a table for 4. The passes are on the Infield with a premium viewing area for the full weekend, plus access to private bar service, a complimentary 2-hour picnic in the Bud Light Bullpen Balcony each night, and exclusive right to purchase premium parking.

Fill out the online contest form:

1. How to Enter the Contest

a. All entries must be received by WXPN no later than the specified deadline on the specific contest’s Official Contest Rules. The dates, times, entry methods, winner selection and prizes will vary with each giveaway, as determined by WXPN and announced. All times are in Eastern Standard Time.

b. To participate in the contest, refer to the specific contest’s Official Contest Rules.

c. WXPN is not responsible for a submission that is lost, undelivered or misdirected, or for entries not received due to difficulty accessing the Internet, service outages or delays, computer difficulties or other technological glitches.

a. The contest is open to adults (18 years or older). Employees of WXPN, its contest sponsors, volunteer staff members managing the contest, and the members of their households are ineligible to participate in the contest or win. This includes spouses, siblings, parents and legal guardians, children and legal wards, grandparents, and grandchildren, including “in-laws.”

b. Do not enter any contest if you are not located in the United States at the time of entry.

c. Though participants may make more than one gift to WXPN, we will only consider one entry per person. Odds of winning depend upon the number of eligible entries received during the Contest Period.

3. The Prize Description
a. The prize includes a ROYAL VIP pass (4 VIP tickets) to White Rose Music Festival at PeoplesBank Park on October 7 & 8, 2022. This pass includes Infield seats with a premium viewing area for the full weekend, plus access to private bar service, a complimentary 2-hour picnic in the Bud Light Bullpen Balcony each night, and exclusive right to purchase premium parking.

c. No cash or other substitution, assignment or transfer of any prize permitted, except by Sponsor. Prizes may not be claimed or used by any person other than the winner of the giveaway.

d. The winner is responsible for all fees and expenses associated with the acceptance, use and/or misuse of the prize not expressly included in the prize description.

e. The station reserves the right to make changes to the rules of the contest, including the substitution of a prize of equivalent value, which will become effective upon announcement. If due to circumstances beyond the control of the Station, any prize-related event is delayed, rescheduled, postponed or canceled, the Station reserves the right, but not the obligation, to cancel or modify the contest and shall not be required to award a substitute prize.

f. The prize may be received via e-mail, text or direct message. If mobile options are not available, prizes may be picked up at the office of WXPN, 3025 Walnut Street, Philadelphia, PA during business hours (Monday – Friday, 9 am to 5 pm – excluding holidays). The prize may also be shipped by WXPN upon the winner’s provision of certification of eligibility and an executed prize receipt and publicity release. Prizes not claimed within the stated period will be forfeited.
4. Selection of Winner

a. Decisions of station management with respect to the contest are final. Such decisions may include, but are not limited to, whether an entry adheres to the entry criteria, the time of entry receipt by WXPN, the order in which entries are received, the eligibility of the entrant, and, in the event entry requires the submission of an answer or response, whether that answer or response is correct.

b. The prize winner will be selected at random from all eligible entries received by the specified deadline.

c. Entrants need not be present to win. By participating in the contest, entrants agree that the WXPN may contact the winner by email, direct message, or by phone. If the winner does not claim the prize within the specified time period after receiving the notification, that contestant will forfeit the prize and an alternate winner will be selected and notified from the remaining entries.

a. Payment of all federal, state and local taxes is the sole responsibility of the winner.

b. By participating in the contest, the winner gives license and full permission to have their name, voice, or likeness used in any advertising or broadcasting material relating to this contest without additional financial or other compensation, and to sign a publicity release prior to acceptance of the prize. The winner must also sign a prize receipt and certify compliance with all eligibility requirements prior to release of the prize.

c. WXPN, in its sole discretion, reserves the right to disqualify any person for tampering with the entry process or with the operation of the WXPN Web Site or who is otherwise in violation of the rules. Failure to conform to all contest rules, or any fraud or other illegal or inappropriate conduct on the part of a contestant or on a contestant’s behalf, will result in the contestant’s disqualification and forfeiture of any prize won.

The Contests are administered by WXPN unless otherwise specified in the official rules and any questions, comments or complaints regarding the Contest must be directed to WXPN unless otherwise specified. WXPN reserves the right to make changes in the rules of the contest. There is no substitution, transfer, assignment, or cash equivalent for prizes.

No purchase or donation is necessary.

WXPN is not responsible for typographical or other errors in the printing, the offering or the administration of the contest or in the announcement of a prize, or cancellation of the performance.

9. Copies of the Contest Rules

Copies of the written contest rules will be available up to 30 days after the end of the contest at xpn.org. You may also receive the rules by mail by sending a self-addressed, stamped envelope to WXPN Contest Rules – Rachel Barrish, the WHITE ROSE MUSIC FEST CONTEST 3025 Walnut Street, Philadelphia, PA 19104