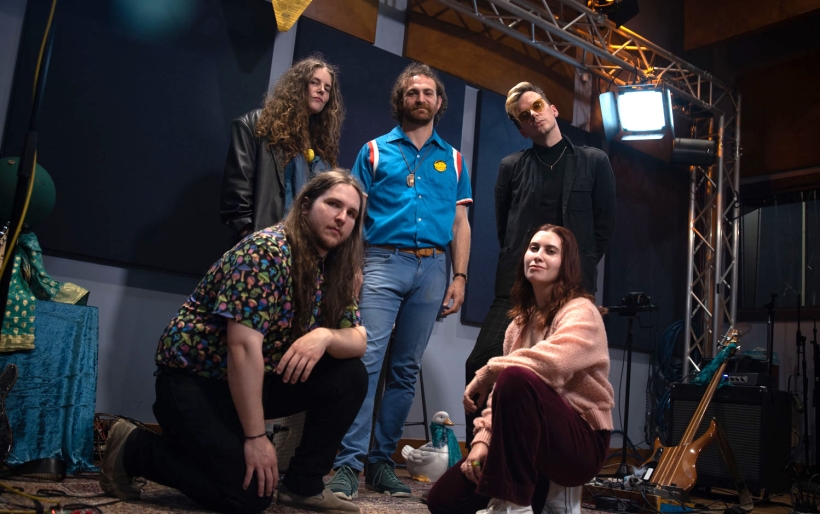 The Lunar Year | photo by Paige Walter for WXPN

The Philly art-rock ensemble plays a knockout set at WXPN studios ahead of an appearance at Germantown’s Sweet Juice Festival.

The Lunar Year is an ever-evolving ensemble led by frontperson and songwriter Katie Hackett — and as far as the spectrum of Philly art rock goes, her earliest releases closely hugged the more ethereal side of things, best exemplified by a moving single called “Chime.” The album it came from, katie bird, was written and recorded in the pandemic lockdown, and released before concerts had fully returned, and when Hackett finally assembled a band to play out, the vibe shift was immediate.

Where there were once spectral vocal harmonies, there was now fervent growls; where Hackett might have strummed a plaintive acoustic melody before, she started playing barreling riffs. A rager of a gig at The Grape Room last summer acted as an introduction to The Lunar Year 2.0, followed by a sensational performance Left Of The Dial Live, which features the first recordings of many of the songs you’ll hear in The Lunar Year’s Key Studio Sessions set today.

The five songs that make up this performance will all appear on The Lunar Year’s next album, and range from the punchy and playful Courtney Barnett-esque rocker “Don’t Kiss Strangers” to the kaleidoscopic Quilt-esque dreamscape “Mist of the Teal Mera.” The anchors, though, are two dynamic epics. First, “Fantastic Radish” is a a birdcall-laden intro to the set (complete with stuffed bird cameos) that glides seamlessly into an explosive “Wild Mountain Camp,” and as the rhythm section of versatile bassist Erik Kramer (who is appearing on his fourth Key Studio Session of the past year) and drummer Adam Shumski (appearing in his third Key Studio Session) drives the song onward, guitarist Dan Ryan and cellist Alyssa Almeida trade licks and cathartically shred, ducking back when it came time for Hackett to sing. The finale of “Tromping The Duck” does the same, only on a much more massive scale.

Watch the performances below, and check out a gallery of scenes from the session. For more from The Lunar Year, head out to Germantown’s pastoral Rigby Mansion this Sunday, July 31st, for Sweet Juice Summer Fest, where the band is a featured performer on a stellar bill alongside Sug Daniels, Justmadnice, emospacebird. and more. Tickets and more information can be found here.