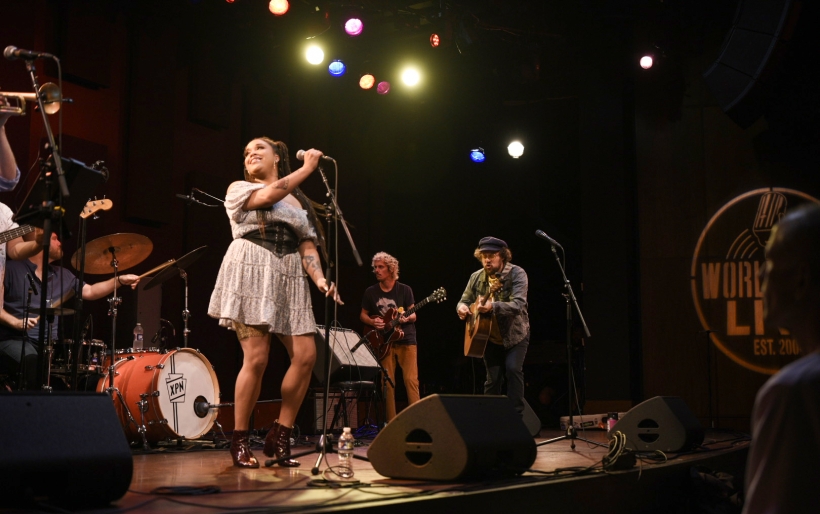 The LA-based “folky funk” group made their Free At Noon debut and warmed up for their set at the Philadelphia Folk Festival today.

With a name like Dustbowl Revival, you’d think this band would play some good old fashion country or bluegrass, but they really are much more. The first song in their Free At Noon set, “Dreaming,” is an odd fusion of ska and their own brand of horn-driven folk funk. Even with their depth of sounds, the band still seems to be put into the roots rock category, but regardless of how you describe them, they put on an energetic show today with many energetic contours.

Dustbowl Revival’s ventures into the vast jungle of music did not stop over the course of today’s set, and with the noisy chaotic intro on “Let It Go” — about which lead singer Zach Lupetin quipped the band were hoping it would get really big because of Frozen’s “Let It Go” — the music made a slow burn to climatic finish, creating a three-part musical saga.

But even with almost half of the band off the stage for the more folks the second half of the show, Dustbowl Revival was politically and emotionally charged, with the song “The Truth” which was written as a father looking at his baby knowing she may not have the same rights as her mother and grandmother. This was followed up by a radio and live debut of their newest song “Be (For July),” which was released today.

A common theme through the whole set regardless of style was Lupetin’s skills as a songwriter. He is able to craft a very clear picture of the story he is telling; on their response to the 2018 Parkland Shooting, “Get Rid of You,” he sings “They went back to Stoneman They let ‘em play Nintendo right there in Chemistry / But everybody could still see the bullet holes above that poster of Abraham Lincoln and the seventeen funeral flowers still so green”.

Dustbowl Revival is doing what they want and singing what they want. Even as a self-proclaimed “folky funk group” their attitude is very Punk rock. They even are putting on their own festival in LA this fall which is as Punk and DIY as it can be. They have a new song out today and are playing at the 60th Annual Philadelphia Folk Fest later today as well; for a fee you can stream both stages for the whole weekend if you cannot make it.