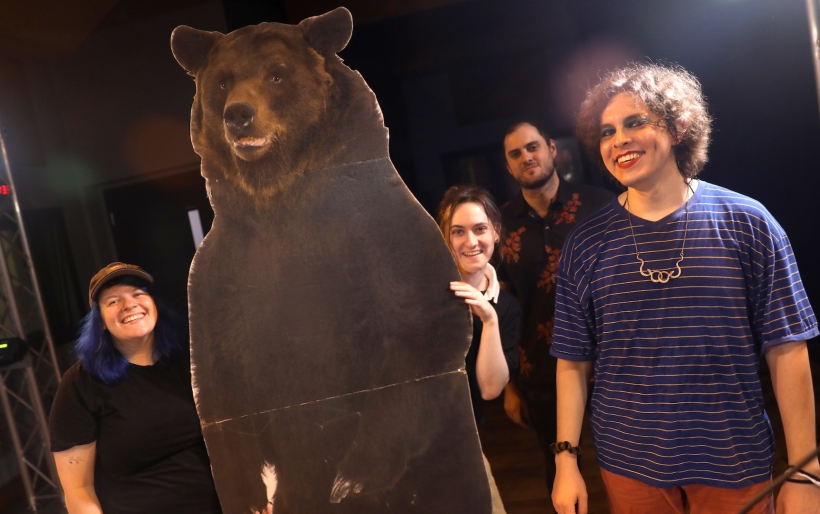 The Philly indie rock four-piece’s debut album When is out now, and they played four songs from it in WXPN studios.

Singer-guitarist Blue was a force on the Philly indie scene while their band Best Bear was still in the idea stage. You could catch them in the crowd, smiling and singing along, or collaborating with friends and peers on Instagram videos, building community at the gig and online.

It set a perfect stage for Best Bear’s touchdown, which we can date approximately to their spring 2020 singles “T.M.W.Y.” and “Through The Static,” but more specifically to Saturday, June 5th of 2021 — aka West Philly Porchfest, when the band played a stellar set during a stacked show at 50th and Osage. It proved that not only was Blue (and their band) a positive force behind the scenes, they were a positive force onstage too.

Rounded out by guitarist / vocalist Gwen McFadden, bassist Storm Paul, and drummer Charles D’Ardenne, Best Bear makes heartfelt indie rock in the orbit of Waxahatchee, Soccer Mommy, Hop Along and Sadurn; it’s about heartache and the search for happiness, it’s about being your most authentic self, whatever that means to you. Their song “Eleventh Grade,” which they delivered a stellar performance of in the Key Studio Sessions this week, contains what might be their mission statement of inclusivity, compassion, and self-love: “Be queer. Be gay. Fuck what anybody has to say. Be trans, nonbinary, whatever’s gonna make you happy. Your truth is gonna set you free.”

The session also contains four other songs from Best Bear’s terrific debut album When: the McFadden-led, Radiohead-esque “My Love Runs Over,” the dynamic acoustic-to-explosive “Apathy,” and the bold rockers “Bare Minimum” and “Gaslighter.” Watch video below, order When from Bandcamp, and see Best Bear on tour this month. Tonight they play PhilaMOCA for their hometown album release party; tickets and more information can be found at the WXPN Concerts and Events page.