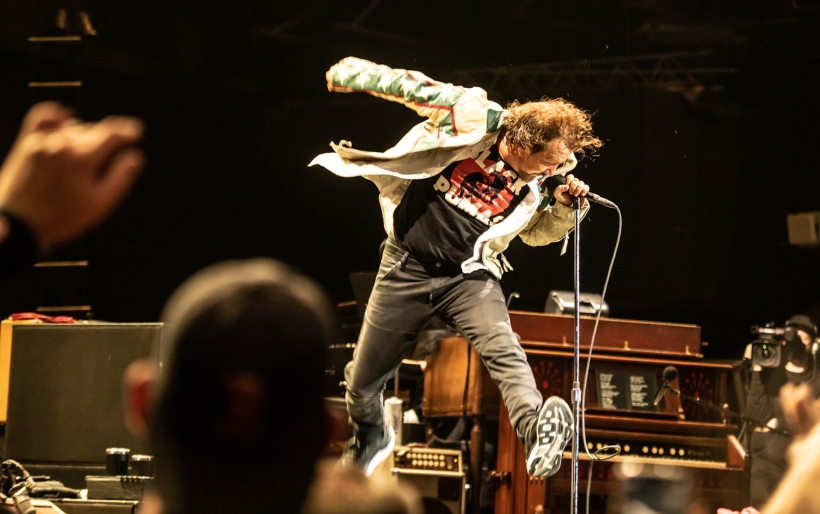 The alt rock trailblazers played a nearly three-hour set last night filled with deep cuts and surprises on the waterfront.

Camden, New Jersey’s Freedom Mortgage Pavillion might not be a 150-cap room at J.C. Dobbs, but given the usual range of hockey arenas – and the occasional baseball stadium – Pearl Jam is used to playing, it might as well be. And that’s exactly how the world’s favorite OG grunge band made its flanneled and disproportionately goateed crowd feel at Wednesday’s midweek South Jersey soiree: like it was seeing the very musical act that spearheaded the 90’s rock and roll movement at a tiny club.

Bobbing and weaving through a set list marked with both hits and deep cuts, famed frontman Eddie Vedder captained the S.S. Pearl Jam through nothing but clear waters and skies, moving full steam ahead through three-plus decades of the band’s biggest jammers, thrashers, boppers and crooners. To his immediate right, bassist Jeff Ament held down the fort manning the night’s lowest frequencies, which provided a canvas for lead guitarist Mike McCready’s endless soloing. It’s nice to know there are still huge rock bands with guitarists who can do that.

On the other end of the stage, Stone Gossard mostly followed Ament’s lead on rhythm guitar while Matt Cameron, whom Vedder correctly referred to one of the greatest drummers on the planet, provided the only doses of thunder in S.S. PJ’s voyage. 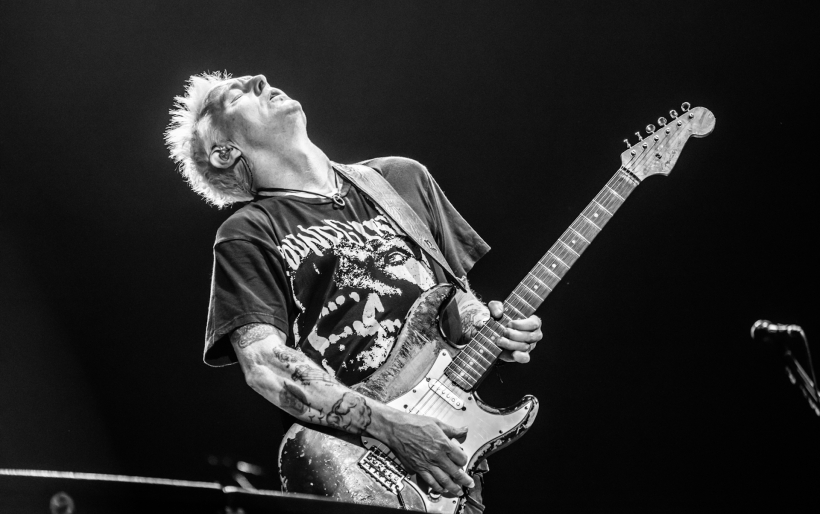 Calling them ageless might be a bit of a stretch – after all, Vedder isn’t climbing stage light fixtures anymore – but if you closed your eyes last night while absorbing the grungey-but-graceful, fuzzy-yet-pristine sounds from the Seattle rockers last night, you might’ve guessed each band member was still in his 20s, not mid-to-late 50s. Unlike some of their peers, Pearl Jam is an old school rock and roll band that’s aged like fine wine, writing more than enough material to make each setlist different every night. The uniqueness of each Pearl Jam show means each concert leaves the attendees with memories akin to a hand-crafted, one-of-a-kind collectible, which probably explains why so many members of the band’s cult fanbase have seen them perform upwards of 20, even 30 times or more.

Several local Pearl Jam concerts in recent memory have entered the vaults of PJ lore, like when the band played a more than three and a half hour setlist at the final Spectrum show in 2009 or their 2016 performance at Wells Fargo Center when they played Ten in its entirety. Last night’s concert won’t be asterisked in the touring history of PJ shows like those two, but it featured the requisite highs and lows of any quality Pearl Jam performance. “Given to Fly,” which Vedder dedicated to Sixer Julius Erving, marked perhaps the highlight of the night as the sold out Freedom Mortgage crowd raised their fists and sang along to the band’s best and possibly most consistent live staple. But classics like “Daughter,” “Do the Evolution,” “Corduroy,” and “Even Flow” — as well as unexpected covers of Pink Floyd (“Interstellar Overdrive”), Sleater-Kinney (“Modern Girl”), and Van Halen (“Eruption”), all of which populated the first act of the show — carried the S.S. Pearl Jam safely to its final destination.

The band’s seven-song encore consisted of “Inside Job” from the band’s eponymous album and the band’s two tracks from 1992’s era-defining Singles soundtrack — “State of Love and Trust” and “Breath” — before eventually giving way to the penultimate “Alive.” A cover of Neil Young’s “Rockin’ in the Free World” closed out the set, as each attendee left with their own exclusive Pearl Jam memory, marked “9/14/22 – Camden” in their cranial filing cabinets. As the saying goes: snowflakes are all like Pearl Jam concerts, each different but beautiful in their own special way.