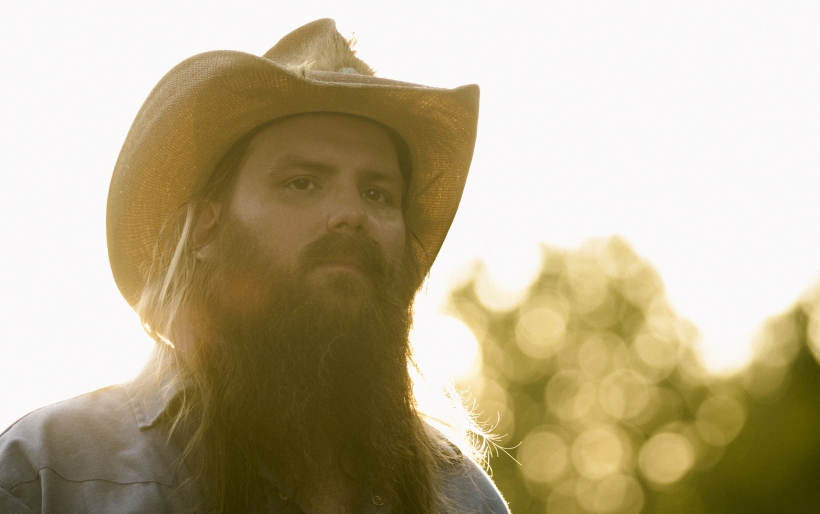 Chris Stapleton has released From A Room: Vol. 1, the follow-up to his award-winning solo debut.
Andy Barron/Courtesy of the artist

The country legend-in-the-making and his wife recorded fresh versions of songs culled from his years as a highly regarded Nashville songwriter. Hear their interview with World Cafe.

Fans throwing back whiskey while listening to Chris Stapleton, or hollering in delight at his thrilling shows, might be surprised to learn that country’s woolly legend-in-the-making is actually kind of a nerd. He spends time online bidding on old guitar pedals so he can replicate the sounds on his favorite Staple Singers albums, and thinks a great date with his wife, Morgane, is a trip to a record store to scour the dollar bins. Morgane is a nerd too, but the organizational sort: For years, she’s kept track of Stapleton’s vast array of songs by burning them on CDs and cataloging them. Their habits combined in an interesting way to shape the new Chris Stapleton album, From A Room: Vol. 1.

The follow-up to Stapleton’s award-winning solo debut Traveller presents fresh recordings of songs culled from the songwriter’s many years as one of Nashville’s semi-secret weapons. Stapleton obsessives will recognize crowd favorites like the soulful “I Was Wrong” and the stomper “Second One To Know.” That latter track was co-written by Mike Henderson, who was in the bluegrass band The SteelDrivers with Stapleton; From A Room: Vol. 1 also highlights the writing relationships that helped the golden-voiced Kentuckian form the sensibility that makes his recordings so special.

That sensibility is well grounded and wide-ranging. From A Room: Vol. 1 demonstrates Stapleton’s fluency in classic country, hard-driving rock and raw Southern soul, with the gospel-inspired “Broken Halos” setting off an arc that eventually lands in the deep blues of “Death Row.” As is their modus operandi, Morgane worked with Chris to select the songs, and producer Dave Cobb weighed in too. They brought the material into the historic RCA Studio A on Music Row — the Chet Atkins-constructed space that’s Cobb’s main base of operation these days — where vintage equipment, high ceilings and history stained into the walls inspired performances that ring with emotion.

On a sunny May Tuesday, Chris and Morgane sat on the burnt-orange leather couch in Studio A’s control room to talk with me about the making of this album and the journey that’s swept them up since Traveller became one of the great critical and commercial successes of 2015. Grounded and gracious, they embodied the openness and grace that is the best of Nashville right now. Hear our conversation at the audio link, and read on for highlights.