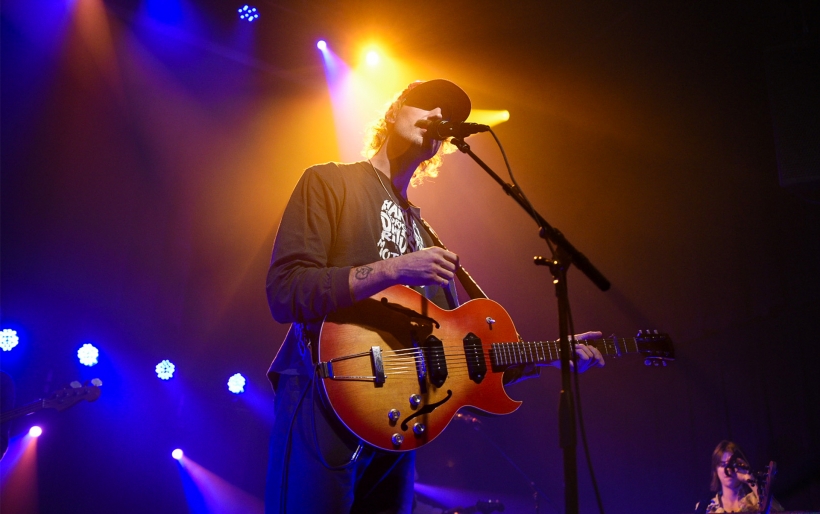 Rayland Baxter stretches out for an hour-long Free at Noon

The Nashville singer-songwriter played his third midday concert for WXPN on location at Ardmore Music Hall this week.

“It’s nice to be in a dark club on a bright day,” singer-songwriter Rayland Baxter told a crowded house at Ardmore Music Hall on Friday afternoon. It was his third appearance on WXPN’s Free at Noon concert, it was in support of his brand new ATO Records release If I Were AButterfly, and truly Baxter seemed to be enjoying the vibe; where most artists deliver a strict eight-song / half-hour set and call it a midday, Baxter delivered a ten-song performance of expansive jams, stretching almost the entirety of the noon hour.

Off the rip, he got introductions out of the way, beginning with Philly native Barney Cortez on guitar, followed by fellow bandmates Kyle Davis on drums, Nathan Aronowitz on keys, and Todd Bolden on bass. Baxter also gave shoutouts to girlfriend Sofia Rose and his dog Hippie, and after two minutes of warmup, he intoned “I will sing now,” and launched into the title track to his new album.

Chill and trippy Americana is how Baxter has built his rep over the past seven years and four albums, and he approached this set at a particularly chill pace. After the punchy rocker “Rubberband Man,” where Baxter stylishly bounced back and forth between a microphone with a filtered vocal effect and a clean mic, he slid into the ten-minute dyptich of the suave tubthumper “Mr. Rodriguez” from 2015’s Imaginary Man cross-fading into the honky tonk of “Strange American Dream” from 2018’s Wide Awake.

After the mid-set break, Baxter and band began to go largely off-script from the planned setlist; the sneaky suave sothern-fried funk of “Billy Goat” channeled Citizen Cope and Morphine, and from there the Tex-Mex harmonies of “Hey Laroco” provided a delicate interlude before his popular 2018 single “Casonova” brought the beat back up. “Sandra Monia” and “Olivia” rounded the set out on a lengthy note of delicate deconstruction, as intimate in the room as on the radio, and it set the stage nicely for the folks attending his full set at Ardmore Music Hall last night.

Check out photos from Rayland Baxter’s Free at Noon performance below. His tour continues tonight at The Hamilton in Washington, D.C.