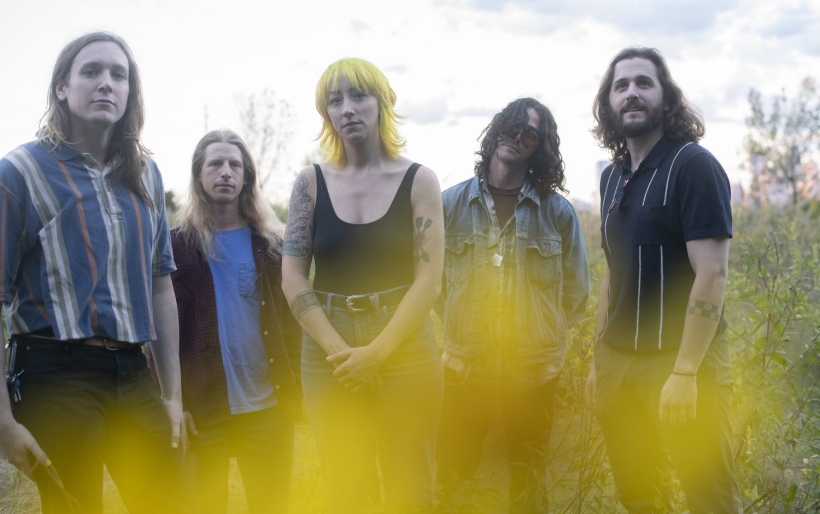 Gladie is a band that luxuriate in tough questions, and Don’t Know What You’re In Until You’re Out is chock-full of them.

At this point in their careers, the members of Gladie have experienced the highs and lows of the Philly music scene. Comprised of members of Tigers Jaw, Three Man Cannon, and Cayetana, Gladie are less a supergroup than a band of musicians with a shared history, a bedrock of collective experience that makes creating something new and exciting just another step in a journey that started far before their 2020 debut LP, Safe Sins. Which is perhaps why their new record, Don’t Know What You’re In Until You’re Out, feels so lived-in, worn, and familiar even as it so clearly represents a next step for the band. Gladie does not have all the answers, but they seem to have found a few along the way, lending even more immediacy to the questions that remain.

“I didn’t get it then, but I get it now,” sings songwriter and vocalist Augusta Koch on “Heaven, Someday,” a song that readily brings to mind Koch’s former band, Cayetana. The crunchy, low-ceilinged basement aura of “Heaven, Someday” is, intentionally or not, in perfect symmetry with its lyrics, which look back with, while maybe not regret, a certain amount of exasperation. “Happy is a concept that felt too decadent to try,” Koch sings later in the song. It’s an admission of the kind of depressed state  only recognizable in hindsight.

Safe Sins was a great album, one I was lucky enough to talk with Koch about for this very site, but I find it hard to imagine “Heaven, Someday” on that record. A lot has happened for Koch between the time of Safe Sins and Don’t Know What You’re In Until You’re Out including quitting drinking, getting diagnosed with an autoimmune disease, and, course, that other paradigm-shifting event that occurred maddeningly close to Safe Sins’ February 2020 release date. While likely none of it was easy, it does seem that happiness is a more accessible concept for Koch than ever before. When the world hurls challenge after challenge your way, self-flagellation can lose its perverse allure.

That’s not to say Koch purports to be some wise indie-rock lifer dispelling wisdom from on high. Gladie is a band that luxuriate in tough questions, and Don’t Know What You’re In Until You’re Out is chock-full of them. “What would it feel like to want nothing?” Koch asks on “Nothing,” a lyrically stuffed rocker. At this point, whether asking questions or answering them, Koch is the master of the one-liner, lyrics that will surely stick with you for days on end. Blend that with the band’s growing skills as a free-flowing collaborative unit and you get one hell of a record. “Soda” is a wonderful example of a song displaying the best of what each member has to offer. A heartfelt and contented song, you can very much hear the influence of co-songwriter Matt Schimelfenig, the way it ambles along yet grows richer with each passing second, becoming this swirling, spacey thing without losing its bearings. “You make me normal, make me feel like I belong,” Koch intonates as the song fades, unintentionally providing a thesis for what makes Don’t Know What You’re In Until You’re Out such a joy.

You can see Gladie open for Laura Jane Grace next Tuesday, November 29th at Ardmore Music Hall, or with Jeff Rosenstock and Laura Stevenson at The First Unitarian Church on Saturday, December 17th. Tickets are available at the WXPN Concerts and Events page.