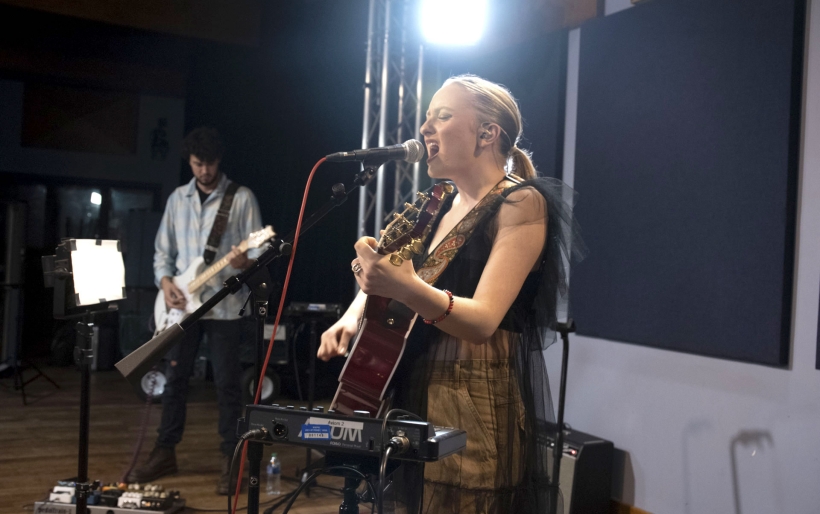 The Philly rock band showcases a vibrant assortment of singles and one killer 90s cover in WXPN studios.

Seven years ago, she repped Philly on season ten of The Voice, then released left-of-center pop singles under her own name in the wake of that experience. As her songwriting became more stylistically expansive, Gina began working with new players under the name Zo The Band, releasing a great EP in 2021 called Dark Hallways that touched on riveting riff rock (“Cry”) and heady reggae (“Never Meant”).

This past summer, Gina and her bandmates — guitarist Joe McEnany, drummer Buddy Mazzenga, and bassist Andrew Amado — boldly took another step, merging their rock and roll chemistry with the hooks and charisma of Gina’s pop days, not to mention that spine-tingling voice. Rechristened Velvet Rouge, they set to work refining and documenting this phase of their creative journey with veteran local producers Brian McTear and Amy Morrissey at their Fishtown studio Miner Street Recording.

They worked on a reinvention of the alt-rock classic “Ocean Size” by Jane’s Addiction as a get-to-know-one-another first step, and the song turned out so well, it now opens the band’s live sets — including this Public Radio Music Day performance at WXPN Studios. They also captured the cathartic, blues-tinged anthem “Save Me,” and released it as the first single under their new name in August.

This studio session also includes performances of the next few songs Velvet Rouge will roll out into 2023, as well as a conversation with Gina about her evolving style, how she became more self-assured in her creative vision, the collaborative experience of working with McTear and Morrissey, and more.

Listen above, watch videos of the performance below, and check out a behind-the-scenes gallery by WXPN’s Paige Walter. Velvet Rouge’s next show happens Friday, December 16th at Brooklyn Bowl Philly, opening for Minka at their end-of-year masquerade; tickets and more information can be found at WXPN’s Concerts and Events page.