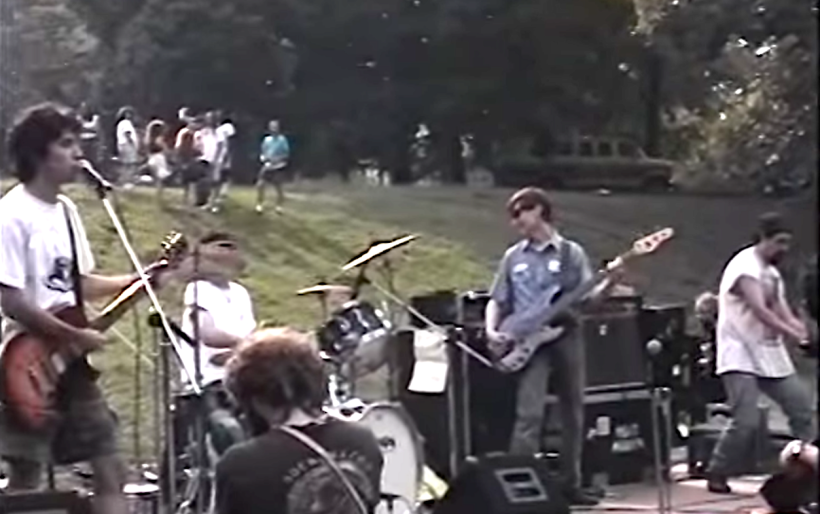 The Dead Milkmen in Clark Park | still from video

*This article was originally published on August 7, 2018

As somebody who enthusiastically subscribes to the “West Philly / Best Philly” mantra, there is so much to love about this vintage video of Philadelphia icons The Dead Milkmen headlining an outdoor show in Clark Park. The verdant greenery from all angles, the audience watching from the slope of the dog bowl, the grizzly folks packing the front row with handicams and enthusiastic energy.

The video was shot on VHS way back on August 7th, 1993. The gig also featured a set from neighborhood oddballs EDO — “everybody loves EDO,” says the MC introducing the band — and features the Milkmen in classic irreverent form, punctuated by a long-haired, ponytailed, goatee’d Rodney Anonymous pacing the stage franticly, spitting into the mic, rocking a cutoff Butthole Surfers t-shirt.

“This song will offend all the politically correct people here today,” says Rodney as a lead-in to “Wonderfully Colored Plastic War Toys” from 1992’s Soul Rotation. “Let’s do it, let’s torch the whole fuckin’ village.”

Even better is his rant in advance of “Bitchin’ Camero,” which fans know is performed differently at pretty much every show — gone is the “Bill Jr., he was a DARRRRRREDEVIL” bit and in its place is Rodney spitting serious truth about commodified underground music, something that was a legit concern among independent artists in this era. It begins with “death to alternative music, death to Lollapalooza,” and ends up with cries of “no hackey sack,” “don’t put a bandana around your dog,” “free the dogs,” etc. Okay, so maybe that was also a bit directed at earth child hippie culture too, and how the marketing of “alternative” youth culture tried to overlap it with punk.

The kicker is the closing “Big Lizard in My Backyard,” where the camera pans over to reveal that, indeed, a giant inflatable lizard has made Clark Park its home for the afternoon. Was it there the whole time? Is it still there, somewhere, somehow? So many questions that beg for answers, but in the meantime, I think we can collectively agree that this set is a ton of fun. Watch the video below, care of constant videographer Markit Aneight.