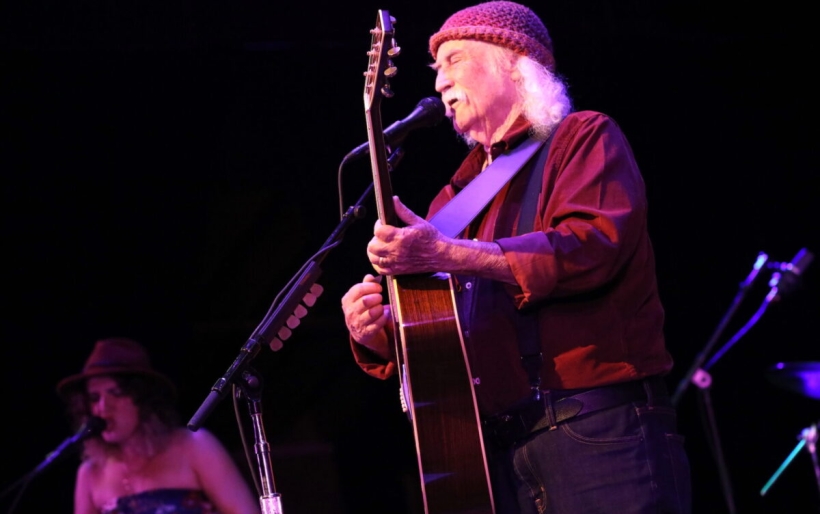 David Crosby, founding member of the Byrds and Crosby, Stills & Nash, Dead at 81

Revisit his last two World Cafe sessions, one from 2017 where he popped in to tell fun stories from his career, and another more recently in 2021.

David Crosby, singer-songwriter and musician who was best known for his work as a member of the folk-rock band Crosby, Stills, Nash & Young has passed at the age of 81, NPR has confirmed.

Variety, released a statement from his family today:

“It is with great sadness after a long illness, that our beloved David (Croz) Crosby has passed away. He was lovingly surrounded by his wife and soulmate Jan and son Django. Although he is no longer here with us, his humanity and kind soul will continue to guide and inspire us. His legacy will continue to live on through his legendary music. Peace, love, and harmony to all who knew David and those he touched. We will miss him dearly. At this time, we respectfully and kindly ask for privacy as we grieve and try to deal with our profound loss. Thank you for the love and prayers.”

Born in Los Angeles, California, Crosby began his music career in the 1960s as a member of the band The Byrds, where he played guitar and sang harmonies. He was an important member of the band and played on several of their hit songs, including “Turn! Turn! Turn!,” “Eight Miles High,” and “Why.” He also wrote several songs for the band, including “Everybody’s Been Burned” and “Triad.”

In 1968, Crosby, Stephen Stills, and Graham Nash formed the supergroup Crosby, Stills, & Nash. The band released their debut album that year, which included the hit songs “Marrakesh Express” and “Suite: Judy Blue Eyes.” The band was known for their powerful harmonies and socially conscious lyrics, and they quickly became one of the most popular bands of the era.

In 1969, Neil Young joined the band, and they became Crosby, Stills, Nash & Young. The band released several successful albums, including Deja Vu, 4 Way Street, and So Far. They also embarked on several tours, including a legendary tour with the Grateful Dead in 1974.

Crosby also released several solo albums throughout his career, including If I Could Only Remember My Name in 1971, Croz in 2014, and most recently For Free in 2021. He also collaborated with other musicians, including Joni Mitchell and Graham Nash.

Throughout the 1970s, Crosby struggled with drug addiction and legal problems. In 1985, he was arrested for drug possession and served time in prison. He has been arrested multiple times for drug offenses and has also struggled with alcohol addiction – but despite his struggles, his redemption story since has allowed him to remain an influential figure in the music world.

Throughout his life, Crosby was also known for his political activism. He has been a vocal advocate for environmental causes, and he has been involved in various charitable organizations, including the Rainforest Foundation.

He is widely regarded as one of the greatest songwriters of his generation, and his work with Crosby, Stills, Nash & Young has left a lasting impact on the music industry. Until his death, he continued to tour, perform, and be an important voice in the world of music and politics.

Revisit his last two World Cafe sessions, one from 2017 where he popped in to tell fun stories from his career, and more recently in 2021 for a listening session from his album, For Free.