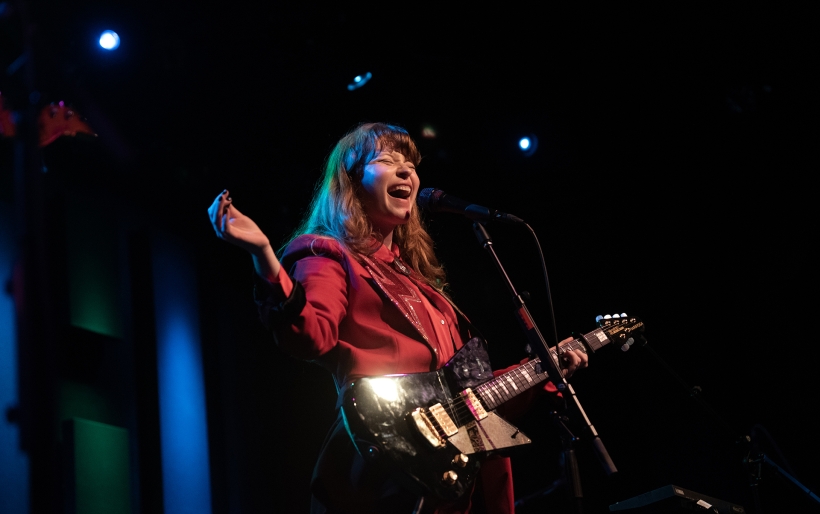 The NYC-via-Texas singer-songwriter shone like a star for today’s midday concert.

“I am so happy to be back here in Philly,” Allison Ponthier told today’s Free At Noon crowd. “My first real major show was in Philly, it was with Lord Huron a year and a half ago, and it changed my life.”

The Texas-born, Brooklyn-based singer-songwriter seems to be on a largely positive trajectory over the past several years, breaking out on TikTok in 2019, signing to Interscope Records in 2020, releasing her debut EP Faking My Own Death to much acclaim in 2021 — Billboard highlighted her song “Cowboy” in its “25 Best LGBTQ Songs of 2021 (so far)” roundup — and going on tour with Bleachers in 2022. How 2023 is fixing to top that is anybody’s guess, but today’s midday concert was a solid start.

Allison Ponthier’s music is shimmering pop with honeyed vocals and a bit of a country flare; think Kacey Musgraves, think Jenny Lewis. Joined by Caitlin Kalafus on drums and Stu Pender on guitar — with the minimal trio backed by a curious dual-laptop setup of samples and backing tracks — she worked through a set of highlights from each of her EPs, as well as a surprise cover or two.

The opening “Hell Is A Crowded Room” from Death was a dreamy builder to open the show, followed by the yearning rocker “Autopilot,” which plunged the depths of adolescent emotion, learning how to adult, and feeling stuck in place. The title track to Death segued into a verse and chorus of “I Lied” by Lord Huron to the delight of those in the know. Meanwhile, when the tracks on “Harshest Critic” abruptly backfired, Ponthier rebounded gracefully by teaming up with Pender on a breathtaking cover of “The Night Josh Tillman Came To Our Apartment” by Father John Misty, who she called her favorite artist.

“How’s that for a recovery?” Ponthier joked after the song rang out. “Gotta keep expectations low to keep satisfaction high.”

Ponthier then moved from a Father John Misty cover to her own song called “Hollywood Forever Cemetery” for a clever “I see what you did there” moment wrapped in a deep contrast; Ponthier’s track is a jaunty disco-adjacent bop a la Lucius, as compared to Tillman’s introspective dirge “Hollywood Forever Cemetery Sings” from Fear Fun. Each song had an anecdote or explainer to go with it, from a bat in flight bringing Ponthier comfort as she prepared to face the 4000-strong crowd of Lord Huron fans at the Mann Center’s Skyline Stage, or the description of the themes of experiencing loss for the first time on “Shaking Hands With Elvis,” or the fact that “Cowboy” is “really important to me, it’s my autobiography, it’s first song I wrote by myself before I ever thought I could do this.”

Check out a gallery of photos from Allison Ponthier’s Free At Noon below, and explore her music and persona further over at her Linktree.