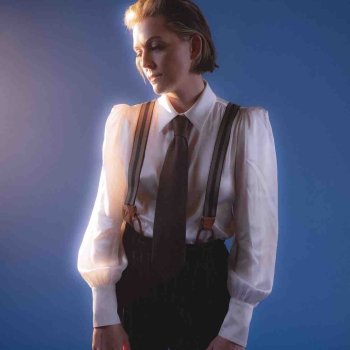 Who They Are: Holding equal regard for the worldy folk honesty of Indigo Girls and the theatrical pomp and circumstance of Elton John, Brandi Carlile carved her own lane in the singer-songwriter universe. Launching her career in the coffee shop circuit of her hometown of Seattle, she and longtime backing players “the twins” — Phil and Tim Hanseroth — took a DIY route to global success, hustling for gigs at dream venues and meeting with label execs, working with the legendary producer T. Bone Burnett early on, breaking out with their sophomore album The Story, and reaching new heights (and winning multiple GRAMMY awards) for 2018’s lush and emotive By The Way, I Forgive You. In addition to being a performer, Carlile is a connector and an activist — bringing together dozens of her peers and heroes to support fundraising efforts for War Child UK and Children in Conflict, among other charities. In 2019, she paid tribute to one of her favorite songwriters by performing Joni Mitchell’s Blue in its entirety in Los Angeles, a performance reprised two years later at Carnegie Hall; her first book, Broken Horses, was published in 2021, and she lives with her wife, children, and bandmates on a compound in Washington State.