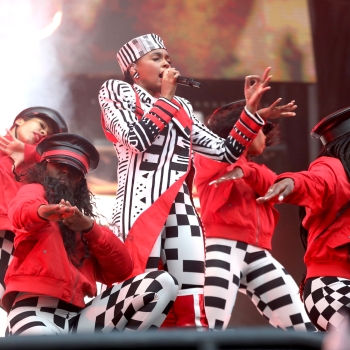 Where They’re From: Kansas City, KS

Who They Are: Stylish singer, songwriter, rapper, and entertainer Janelle Monae is a little bit OutKast, a little bit Prince, a touch Gwen Stefani and a whole lot of herself. She emerged with a bang in the late aughties with a back-story about her android alter ego Cindi Mayweather and a banging music video for her single “Tightrope.” An electrifying force onstage and in front of the camera — whether in tux-clad androgyny or done up like a queen — Monae draws you in effortlessly, and loses you in her songs that are deeply personal as much as they cover a range of poignant social and political issues, from racism and misogyny to the fight for LGBTQ equality. Outside her own work, Monae has guested on songs by Duran Duran, Goodie Mob, and fun.’s massive smash “We Are Young.”