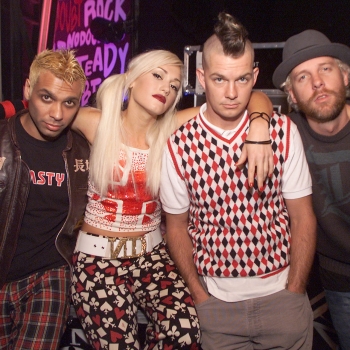 Where They’re From: Anaheim, CA

Who They Are: In 1986, the members of No Doubt were a group of friends from Orange County who decided to form a band; in 1996, they were one of the biggest acts in alternative rock, with their album Tragic Kingdom topping the Billboard charts and three massive singles from it ruling radio and MTV. Led by charismatic lead singer Gwen Stefani along with guitarist Tom Dumont, bassist Tony Kanal, and drummer Adrian Young, No Doubt played ska-infused pop-punk before it was trendy, and then harnessed the trend to blast off into a more expansive aesthetic, exploring burning ballads and a glam sheen on Return of Saturn and the vibrant energy of dancehall and reggae on Rock Steady. The band’s mid-00s hiatus allowed Stefani to fully embody the pop star role she’d been growing into for years; she collaborated with Moby, Eve and more, and released her first solo album in 2004. The band reconvened in 2009 for a comeback tour, followed by 2012’s Push and Shove album.