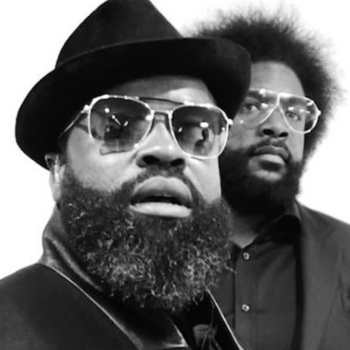 Who They Are: Forming in the practice rooms of South Philadelphia’s High School for the Creative and Performing Arts, Philly icons The Roots took decades of musical influence, from jazz to funk to soul and rock & roll, and folded them into a heady stew: a new angle on hip-hop where the MCs are backed by an ensemble of live instruments. Their sophomore album Do You Want More?!!!??! received critical acclaim, they garnered a bonafide hit with “You Got Me” from 1999’s Things Fall Apart, and their expansive live shows and jam sessions became the thing of legend – especially the freewheeling hometown party Roots Picnic. In addition to being a formidable force in their own right, The Roots have become a go-to house band; they appeared on Jay-Z’s MTV Unplugged special, and they’re on late-night television every weekday with Jimmy Fallon. In the late 20-teens, lead MC Tariq “Black Thought” Trotter began releasing his first-ever solo material, a series of EPs called Streams of Thought, while founding MC Malik Abdul-Basit (aka Malik B) passed away in July of 2020.