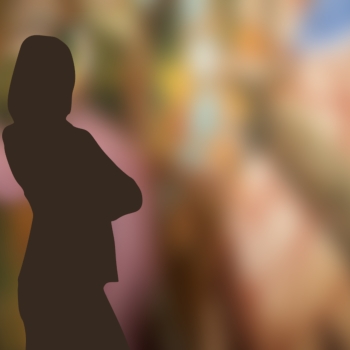 After being a fan of the show since I moved to Philly in 1982, I became host and producer of Amazon Country in 1996. (When people ask me if I was the founding host, I remind them that I was 10 years old in 1974!). I talked my way into the job by convincing Bob Bumbera, who was director of public affairs at the time, that my experience performing comedy, poetry, and original music were all the background I need it. The outgoing Amazon Country host Sue Pierce was kind enough to mentor me.

I grew up in Pittsburgh, PA, and was very influenced by two lesbian and feminist radio programs on the Carnegie Mellon University station WRCT. The power of hearing love songs written by and about women helped me to come to terms with my sexuality. To this day I hold deep affection and admiration for the music of Ferron, Margy Adam, Cris Williamson, Holly Near, and Meg Christian whom I discovered as a teenager in the 70s early 80s.

As an undergraduate at Temple University, I didn’t have the opportunity to work at WRTI because those jobs were limited to students in the communications program (I was a political science major, women studies minor). But I have always loved the intimacy of radio— the way it comes into our homes, cars, headphones like a private conversation with the DJ.

My goal is to provide that intimate listening opportunity to Amazon Country listeners, bringing you a wide variety of music by and about women who love women, and our feminist allies. I’m delighted by how much the music industry (and the world!) has changed so that being out lesbian is no longer the instant career killer it once was… just look at Brandi Carlisle!

I live in the Germantown section of Philadelphia with my wife of 28 years, and our two rescue dogs, Pepper and Avalon.