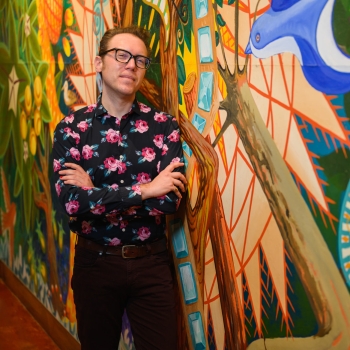 Everyone remembers the first album they bought with their own money, right? I definitely do not. I usually say that it was Queen’s Greatest Hits, not just because of the implied reference to ‘good omens’ but because I do remember winning a cassette copy of the venerable compilation from a game of chance on the Seaside Heights boardwalk when I was a kid. In a consequential, and probably not traumatic move, my walkman ate that tape on the ride home, leaving me with a very useless hunk of plastic to enjoy until I could procure a replacement.

I vowed then to never let anything stand in my way when it came to seeking out music. I’m less interested in borders and genres than I am in finding the unexpected connections between seemingly unrelated songs and artists. From diving deep into glowering new wave and kaleidoscopic jazz in high school to embracing emergent indie rock and excavating lost psychedelic nuggets in college, I am near-constant pursuit of hearing the unheard.

Don’t get me wrong: I have great love and admiration for all the music I’ve already heard but I would also like to hear something entirely different. And, since I’m on the radio, you get to hear it, too. Lucky you.