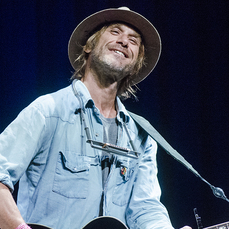 Describing what makes songwriter Todd Snider so charming can be difficult, but this career-spanning seven-song set serves as a great introduction for the uninitiated. Likewise, longtime Snider converts will enjoy these fan favorites along with some of the hilarious between-song banter he's legendary for.
"It takes me a lot of discipline to keep my life as messed up as I keep it," he says, only part-joking, in reference to an early piece of advice he received; If you're able to pack up everything you own and split in 15 minutes, "your life will probably never get on track, but you'll always be getting better at making up songs."
Throughout his career, Snider has toured mostly solo acoustic, as you hear him in this, his 15th appearance on Mountain Stage since 1995. Shortly after this performance in June of 2018, Snider convened to the Cash Cabin Studio in Hendersonville, Tennessee, where Johnny Cash recorded his late-career efforts with producer Rick Rubin. The resulting album, Cash Cabin Sessions Vol. 3, finds Snider in full-on, folk-singing mode with topical songs like "Talking Reality Television Blues" and "Like A Force of Nature," which features Jason Isbell on banjo.
Snider's other recent projects include 2016's East Side Bulldog, a garage rock indebted affair featuring musician neighbors from his East Nashville community, and We're All In This Together, a 2017 live album from his jam band all-star "super hero group" Hard Working Americans. He released a memoir in 2014 called I Never Met A Story I Didn't Like: Mostly True Tall Tales.
Snider has tour dates scheduled through September, including solo dates and some full band dates featuring some of his Hard Working Americans band-mates along with drummer Ken Coomer.
Set List: