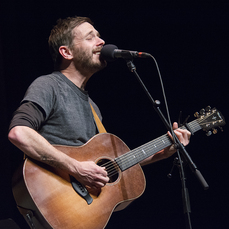 Hit acoustic singer and songwriter Glen Phillips made his eighth appearance on Mountain Stage at a taping in Morgantown, W.Va.
Best known for Toad the Wet Sprocket, the breezy alternative rock band he started at age 14, Phillips has performed on Mountain Stage solo before, but more often makes the journey with friends. He has appeared with a refreshing variety of projects including The Mutual Admiration Society with Nickel Creek and John Paul Jones of Led Zeppelin, and folk-pop supergroup Works Project Administration.
For this trip, Phillips, whom host Larry Groce introduced as "one of the country's great songwriters," shared a fresh batch of songs off his album, Swallowed By The New.
"I like this theater, it looks like the inside of a classic camera," Phillips said before pouring into the social and self-commentary of "Old Habits Die Hard," singing "Save us from ourselves / Save us from each other / Save us from the sickness that sees a threat / And not a sister or a brother."
Phillips then enlisted the veteran Mountain Stage band to put a shine on the rest of the songs including "The Easy Ones." The band puts its own stamp on "All I Want," Toad the Wet Sprocket's breakout 1992 single, followed by a new song, "The Best of Me." Phillips and the band hit a backwoods Southern gravel road for this soul gospel burner, "Held Up," a cautionary story about being rejected at the gates of heaven.
Phillips bookended the set with solo numbers, "Old Habits Die Hard," and the set-ending a cappella version of "We Shall Be Known" by MaMuse.
Set List: