Well, now you’ve gone and done it. You were just so pumped about the inaugural Philly F/M Festival (which kicks off tonight) that you took the plunge and purchased one of those shiny all-access passes, didn’t you? At the time, it made sense: With most shows costing between $10-$20, why wouldn’t you drop a cool $100 and get access to everything? (Of course, if you’re a student, you were able to get one at the discounted rate of $70; if you’re a slacker who didn’t get around to purchasing a pass until after September 22nd, that sweet beauty cost you $150.) Only now—with the first of more than 350 musical performances and film screenings mere minutes away—do you realize what you’ve gotten yourself into. Now you’ve got to sort through a near-overwhelming schedule of events at more than 30 venues, and figure out how you’re going to get your money’s worth out it. Or you could just let us take you by the hand, and walk you through things.

First things first: Stop whatever you’re doing right now, get on your bike, and make your way to Yards Brewing Company in Northern Liberties, where Ben Arnold performs at 5:30 p.m. (Seriously, stop reading this right now and go. You can get the rest of the itinerary from your iPhone once you’re there.) Enjoy the set, maybe even get a drink, but don’t get too comfortable—the rest of the night is going to take some real effort on your part. 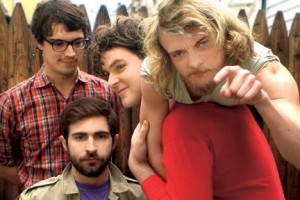 Ben’s set should end just in time for you to run over to Silk City (less than a mile away) and catch a set by psyche-rock quintet Music For Headphones between 7-7:45 p.m. After that quick stop, you’ve got the longest trek of the night (just under a mile and a half)—but don’t worry, it’s smooth sailing after that. Head north to W. Girard Avenue, where you’ll pass The Fire and go all the way to Kung Fu Necktie on N. Front Street. For the next couple of hours, you’ll likely find yourself sprinting back and forth between The Deli‘s showcase at KFN—which features Univox, The Homophones, T.J. Kong & The Atomic Bomb, and Hair Rocket—and the A Sunny Day In Glassgow/East Hundred/Honeychurch show at Johnny Brenda’s, which is just a little ways around the corner. Given the two shows’ staggered starting times (doors are at 7:30 p.m. and 8 p.m., respectively), and operating under the assumption that both shows will be running late by the same amount of time, you should be able to catch a good portion of all seven sets.

If you want to get a little bonus value in, skip out early and catch either Metropolis America back at The Fire or Slow Animal‘s headlining performance at El Bar just up the street from Johnny Brenda’s; we suggest the latter, which costs a little less, but will make the trip up to The M Room to see late performances by Kohoutek and Notekillers a little shorter.

All told, here’s your tally for the evening:

If you manage to pull all of that off, congratulations: You just got up to $54 worth of value in the first of the festival’s four nights while only covering about two and a half miles of distance. Also—we’re really, really impressed.