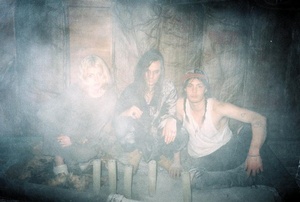 Depending on what blog you’re reading, Salem is either a band the Internet loves to hate or a band the Internet hates to love. Maybe, somewhere out there, there are a bunch of devoted fans that straight-up love to love the controversial “witch house” trio—but who cares about them? Not the band, that’s for sure. Whether it’s on stage (during the most listless musical performance in recent history) or in interviews (including when John Holland infamously quipped, “I don’t even care. I totally don’t,” about the band’s live show), the members of Salem have no problem with letting you know how, like, they totally don’t give a rat’s ass. So, why should you care about Salem’s show at Johnny Brenda’s tonight? The best reason might be to see the opening act, Lehigh Valley’s Soars—a WXPN favorite whom we highlighted in last week’s Key Studio Session (and are definitely worth checking out). Salem performs with Soars at 9 p.m. at Johnny Brenda’s; tickets to the 21+ show are $12.