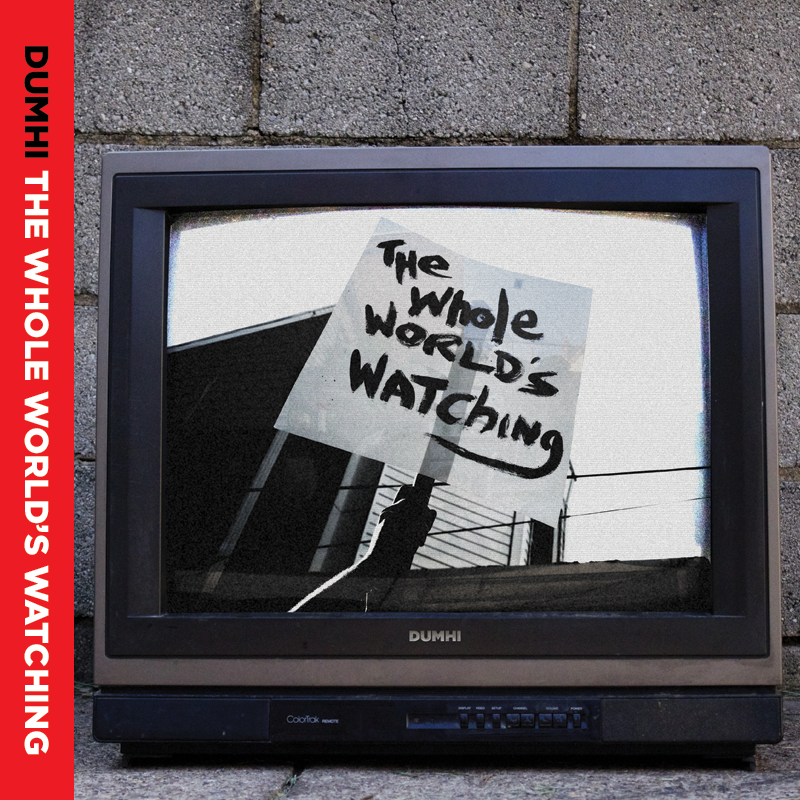 South Philadelphia hip-hop outfit Dumhi excels when it comes to working in themes. The group’s latest release, The Whole World’s Watching, takes its title from the famous protest chant that gets sampled and spliced into a recurring motif across the album. We hear it looped, bumping in sync with a guiding beat as the set opens. We hear it fading into the distance at the conclusion. We notice it peeking out from around a remote corner in the middle.

On past releases, the source material determined the theme for producer/frontman Haj. (Wait, the frontman of this hip-hop group isn’t an MC? You read correctly. Check out my City Paper story on Dumhi from last year for more on that.) This time, Haj knew what story he wanted to tell from the get-go: a study of race and the music industry, and how everything’s changing as labels collapse and digital distribution either democratizes or dilutes the game. With this foresight, Haj went out in search of supporting clips and sounds, coalesced by the chant. The whole world is watching those who are able to make it as stars. The whole world is watching exploitative practices of opportunistic, desperate execs. The whole world is watching the industry shift.

This is a liberating exercise. Dumhi’s last outing—2010’s The Jungle—was collection of tracks based around a sampled crate of Ethiopian jazz. It was excellent (one of my favorite Philly releases of the year), but very much centered around that specific sound. On this album, without a musical unifier, Haj is free to set his A-list of Philly rappers loose over beds of spacy surf (“Radio”), cinematic soul (“Paramount”), and spooky G-funk (“Shade”).

The central theme emerges through vocal samples (Almost Famous, old newscasts, Jerry McGuire) and incisive rhymes by the album’s guest MCs. Newcomer Side Effect walks us through the old path to dubious success on “The Demo”—start out by hustling your tape, sign a deal, realize after the fact that it’s not as sweet a deal as it seemed. (“I didn’t know the more I borrowed, the more I owed / they’re a label, not a bank, that’s what I thank and so I’m sold.”) But the track also poses the question—when labels offer fewer contracts, what next? Side Effect addresses this quandary later on, nabbing one of the record’s best lines on “Double Your Money”: “Hit the city streets and flood the net like WikiLeaks.” Lyrical heavyweight Reef The Lost Cauze delivers a scathing critique on “Fourth of July,” which highlights persistent racial inequities in music, as well as society. He later joins frequent collaborators Random and Ethel Cee on “Paramount,” where Cee steals the show, takes down the industry, and welcomes a new musical era.

Cee is one of Philly’s best kept secrets, an MC who deserves greater prominence locally (not to mention nationally). Unfortunately, this record isn’t quite the place where she finds it—her other appearance, “Shade,” is a quick-and-done verse surrounded by clips. It illustrates the only real shortcoming of The Whole World’s Watching: often, with so much source material collected, the tracks feel like set pieces for the samples rather than songs showcasing the rappers. Exhibit B is “The Illusion,” where MC Scanz has an intense lyrical entrance—“How can we be free if money is god in our society?”—but we don’t hear him until a minute into a three-minute cut (and he’s gone in another minute). The music is alluring, as is the norm in Dumhi, but these songs sometimes feel devoid of a voice.

Then again, we have to remember that Haj is the frontman, not the MCs he collaborates with. And his voice is heard through production, the clips he chooses, the soundscapes he makes. Perhaps we can view the extended passages of audio collage as the equivalent of another MC (Black Thought, for instance, taking an extended verse on a Roots song). Or perhaps it’s just Haj working his unconventional, but no less profound, approach to storytelling.

Dumhi performs with Side Effect, Sick Six, and Doap Nixon tonight at 8 p.m. at Redz Bar and Grill (8208 Roosevelt Blvd); tickets to the show are $5. Dumhi is also throwing The Whole World’s Watching Party from 7-10 p.m. Thursday, April 14, at Slingluff Gallery (11 W. Girard Ave); tickets to the show are free. The Whole World’s Watching is a free download from Dumhi.com until March 31.