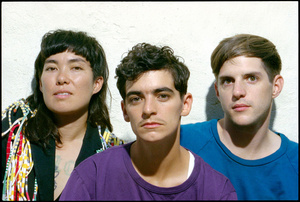 The message is as important and relevant as ever—but is the music? If there’s a knock to be made against MEN—the Brooklyn-based art/music/performance collective led by JD Samson (of the on-indefinite-hiatus Le Tigre)—the general consensus seems to be that the band’s mid-’00s dance-punk aesthetic doesn’t do its politics the justice they deserve. The band’s full-length debut, Talk About Body (released earlier this year by IAMSOUND Records) is full of lyrics pertaining to feminism, gender identity, sexual politics, and other issues that belong at the forefront of any conversation about gender roles in music (and society in general). And yeah, packaging those issues in dance-floor beats, scratchy guitar riffs, and post-disco electronica might not be the most inventive way to  make sure people are paying them the proper attention in 2011—but it’s certainly not lacking in accessibility or appeal, either. MEN performs with Romy at 8 p.m. at Kung Fu Necktie; tickets to the 21+ show are $12.