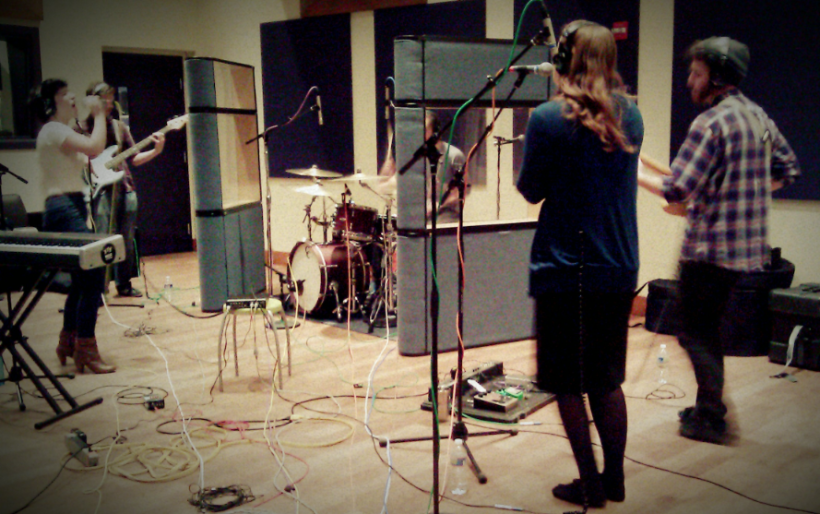 The Key Studio Sessions: The academics of Philadelphia’s Lady

The members of Philadelphia’s Lady are music students, but you didn’t need me to tell you that. You can hear it in the band’s stylistic mixup (torch-song jazz to big-band swing), or its tricky time signature juxtapositions (see “How Did You Know”). It’s there in the tasteful arrangements of “Give Me,” where all the players are given room to breathe (and space to shine). With their higher-ed careers collectively wrapping up, this week is a rare opportunity to catch Lady in an academic setting. Singer Kate Foust and bassist Jim Scanlan give their senior recitals at University Of The Arts on Friday, and they promise their performances will be “even more eclectic than a Lady show.” Scanlan’s recital delivers an overview of his composition work, including a string quartet where his bandmate Liz Zook plays first violin. Meanwhile, Lady as a whole backs up Foust’s recital, which includes a Mozart aria, a rendition of Etta James’ “At Last,” some French chansons, and two Lady originals. “We get to play shows all the time,” says Foust. “I wanted to do things that showcase what I’ve learned in the past four years, where I am as a musician, and things that I would never really get to perform at any other time.”

When Lady visited our studio last week, we got a taste of that in their head-spinning rendition of Gilberto Gil and Gal Costa’s Tropicalia number “Sebastiana,” as well as a moving “La Vie En Rose,” and a set of new Lady songs from the album they’re recording with Phil Nicolo (due out this fall). Help yourself to the originals below, listen to the Philly Local Second Shift on Y-Rock on XPN tomorrow night at 10 p.m. to hear the entire performance and my interview with the band. And for the curious, Scanlan and Foust’s recitals are free and open to the public this Friday, April 15, at 7 p.m. at the Caplan Center For The Performing Arts (211 S. Broad Street, 11th Floor).