Work Drugs finish tour, leave us with their last Sea Journal entries from the road - WXPN 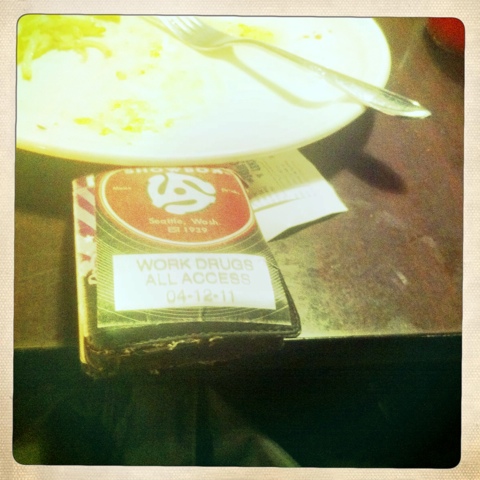 Work Drugs finish tour, leave us with their last Sea Journal entries from the road

Work Drugs recently completed their first official tour, opening for Ireland’s Two Door Cinema Club. Multi-instrumentalists/vocalists Tom Crystal and Ben Louisiana sent us the first part of their tour “sea journal” (which you can read here) last week; below, their final notes from the road, as they settle back in to Philly after their inaugural jaunt across the country.

Waking up in Lawrence , Kansas, the Work Drugs crew head into town for supplies and food before setting out on the voyage through the American West towards Vancouver. Negotiating the high winds and turbulent seas of Kansas and Colorado proves quite taxing on the crew, eventually resulting in morale taking a dip, at least temporarily. Yet by days end, the crew seeks refuge at Denver’s Gunther Toody’s – which appears to be an institution of sorts to the locals.

A squall eventually sidelines our expedition in Cheyenne, WY

Day 6
Smooth sailing all day as we make our way to Twin Falls. Built to Spill is in heavy rotation, as we prepare for the final push towards Canada.

Day 7
Land Ho, the vessel Work Drugs crosses the border, arriving at Venue – in Vancouver. Load in takes place, after which the crew head into town to blow off some much needed steam. Show at 9 tonight then off to late night DJ sets at Republic in downtown Vancouver. DJ Kev from Two Door Cinema Club spins the smoothest of tunes until the wee small hours of the morning. Next stop – showbox in Seattle

Day 8
As we head south from Canada – flannel flags are sighted in Seattle, and anchors are dropped at The Showbox Theater. After a quick stop off at the first Starbucks – an amped up Work Drugs – play arguably the best show of the tour thus far. The response is huge- the beers are cold – we are back in the high life again.

Day 10
San Francisco- arriving into the bay area with time to spare – we quickly drop lines and do a little fishing at Amoeba Music in the Haight Ashbury part of town before heading off to Bill Graham’s house – -the Fillmore.

Sold Out – and high energy – people singing our tunes – and backstage partying – Johnny Walker Black makes an appearance – what a way to end a tour.