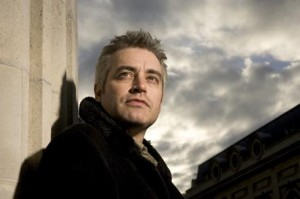 Tonight in PIFA: John Wesley Harding and Cheers Elephant at The Kimmel Center

First let’s clear up the name: Wesley Stace was named after John Wesley, the founder of Methodism. He took his stage name, John Wesley Harding, from the 1967 Bob Dylan album—and that album’s name comes from its title track, which Dylan named after the American outlaw, John Wesley Hardin. (Got all that?) John Wesley Harding (we’re talking about the artist from here on out) moved to Philadelphia last year and plays blues rock and folk noir. He worked his name into the credits of the quintessential audiophile film High Fidelity for the song “I’m Wrong About Everything.” In the 1990s, his name appeared alongside Bruce Springsteen’s when The Boss elected to use Harding as his first opening act in over 20 years. And, to top it off, Harding is also an author: his real name, Wesley Stace, appears on the cover of three novels (the latest of which, Charles Jessold, Considered As A Muderer, we mentioned a month ago). The most recent of his 15 albums, Who Was Changed And Who Was Dead, was released in 2009. John Wesley Harding performs with Cheers Elephant at 5 p.m. at The Kimmel Center; the show will be hosted by XPN Morning Show’s Michaela Majoun and followed by a DJ set with Land Of The Lost‘s Robert Drake. Tickets are free.—Dave Simpson