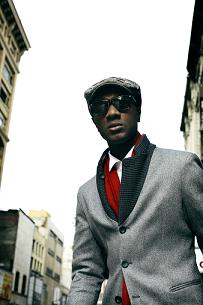 Aloe Blacc is a soulful anomaly on Stones Throw Records. The Southern California label is known for glitchy hip-hop, challenging beats, and a blunted, mellow sound that provides trippy soundtracks for Cartoon Network’s late night programming. Here are three reasons why Blacc is kind of the odd man out: First, Stones Throw is known for production. Blacc is a soul-singer known first for his melodies. It’s a refreshing addition to the label, which was previously carried by beat-makers like the late J Dilla. Second, though the label has an intense niche following, it’s not generally a hit-maker. Meanwhile, Aloe Blacc’s breakout hit, “I Need A Dollar,” is leading the charts all over Europe and has been featured on HBO’s How To Make It In America, a Boost Mobile commercial, and elsewhere. (Stones Throw doesn’t seem to mind, but it’s a nice contradiction to an artist like Madlib, who epitomizes underground hip-hop.) Finally, Stones Throw leads the market in difficult, experimental trip-hop. Flying Lotus is perhaps the most respected artist in that genre, creating noise-scapes with strange samples and recorded sounds. But Blacc is smooth. From his voice to his beats to his style, he’s easy, rhythmic, and accessible. Aloe Blacc performs with Tutu Sweeney And The Brothers Band at 8 p.m. at World Cafe Live; tickets to the show are $20–$30. —Dave Simpson