Recap: Okkervil River at The Trocadero - WXPN | Vinyl At Heart 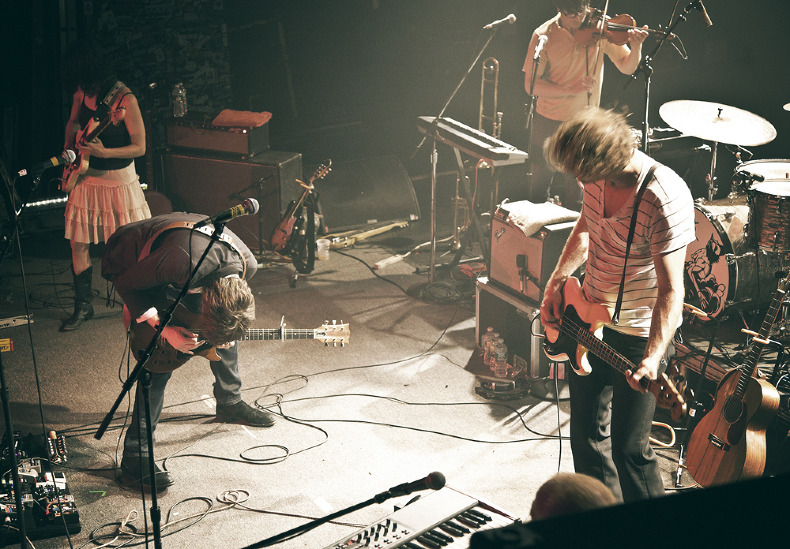 Recap: Okkervil River at The Trocadero

Most of Okkervil River’s releases prior to this year have been concept albums that are tightly unified in theme. But I Am Very Far, released last month, is different in that most tracks are strong enough to stand on their own. Tracks from I Am Very Far sound complete and powerful, even without the original context of the entire album. Even though certain motifs or ideas may be repeated throughout the album, its hardly necessary, or possible, for listeners to point to a concept to validate the album’s cohesion. The beauty of seeing Okkervil River perform now—after almost a decade of producing concept albums and EPs—is that, with such a vast repertoire, no single album can be favored too distinctly in a set list, and the thematic power of concept albums loses its vitality.

So even singles from albums such as Black Sheep Boy, which is consciously woven together with the voice of the titular character, can take on a new sense of independence. For example, “Black” (from Black Sheep Boy) sounds, in a way, liberated. It’s up-tempo, and Will Sheff’s belting and wailing, which made the song stand out as being triumphant on the album to begin with, are amplified when nestled between more melancholic songs from I Am Very Far. The same goes for “Girl In Port,” a sad but pretty tale of a fragile young woman fraternizing with dangerous musicians. When juxtaposed with newer material, the instrumentation—especially the pedal steel and horns—references times when the band was softer, before Sheff liked to wail quite so frantically, the effect being that the song becomes a hidden gem in the middle of the set. Out of 14 songs before the encore on Friday at the Trocadero, Okkervil River gave particular favor to Black Sheep Boy and The Stage Names, playing four songs from each album, and only five from I Am Very Far, which the tour is promoting.

The biggest crowd pleaser of the evening was “Westfall,” from their first LP Don’t Fall In Love With Everyone You See. It’s a song that could easily stand apart from its album, as it tells the story of the grizzly murders of young women in Austin, TX, and seems even more impressively complete when you realize that it didn’t come from a concept album. In the context of the band’s later material, it becomes more evident that even before the band mastered cohesive LPs that tell a story through a conceptualized narrative, they mastered telling short stories in a single.

For a band whose name is derived from a short story by Tatyana Tolstaya (a descendent of Tolstoy), Okkervil River proves that they, too, are skilled story tellers—not only in terms of working within a thematic concept for an album, but taking those songs out of their original context and seamlessly weaving them with stand-alone singles. Dark, complex Russian themes are certainly their niche, but not all of their work needs to be presented like a novel, from beginning to end. As the band matures and their songs gain new contexts, individual singles are completely capable of telling short stories all on their own. —Danielle Wayda